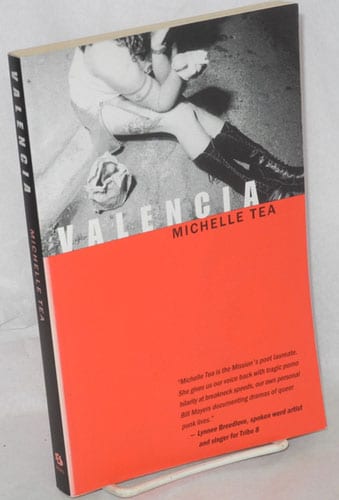 Valencia is the fast-paced account of one girl’s search for love and high times in the drama-filled dyke world of San Francisco’s Mission District. Michelle Tea records a year lived in a world of girls: there’s knife-wielding Marta, who introduces Michelle to a new world of radical sex; Willa, Michelle’s tormented poet-girlfriend; Iris, the beautiful boy-dyke who ran away from the South in a dust cloud of drama; and Iris’s ex, Magdalena Squalor, to whom Michelle turns when Iris breaks her heart.

Michelle Tea (born Michelle Tomasik, 1971) is an American author, poet, and literary arts organizer whose autobiographical works explore queer culture, feminism, race, class, prostitution, and other topics. She is originally from Chelsea, Massachusetts and currently lives in Los Angeles. Her books, mostly memoirs, are known for their views into the queercore community.

Tea was co-founder of Sister Spit spoken word tour. She has toured with the Sex Workers’ Art Show alongside Ducky DooLittle and others. She is also a contributor to The Believer magazine and was the co-writer of the weekly astrology column, Double Team Psychic Dream with astrologer Jessica Lanyadoo, in the San Francisco Bay Guardian newspaper.

In 2012 Tea partnered with City Lights Publishers to form the Sister Spit imprint.

From 2012 to 2015 Tea wrote a column for XOJane where she chronicles the difficulties she is facing trying to have a baby with her partner Dashiell. Her articles document the stress and difficulty that accompanies fertility treatments and artificial insemination, and additionally illuminates gaps that exist for queer couples in a system that was created with heterosexual couples in mind.

There has been a problem with your Instagram Feed.
Tina Takemoto