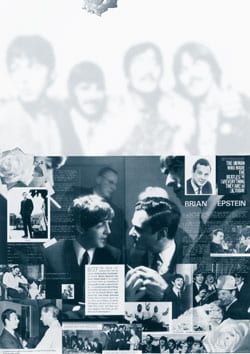 In the world’s first LGBT tribute to unsung gay hero, Brian Epstein, the San Francisco Gay Men’s Chorus, the Lesbian/Gay Chorus of San Francisco, and the San Francisco Lesbian/Gay Freedom Band present a classic selection of toe-tapping Beatles favorites, taking fans on a magic mystery tour down memory (Penny!) lane. The ambitious Brian Epstein unearthed the Beatles in a dingy Liverpool bar in 1961 and changed the world of music forever when he transformed four lads into international superstars! Epstein suffered an untimely death in 1967, but his legacy will endure forever.

Guest emcee for the concert is Liverpool native, Alistair Taylor. Taylor was Epstein’s personal assistant throughout the formative years and heydays of the Beatles. Taylor is a renowned author and aficionado of the Beatles, and appears regularly at Beatles conferences around the globe. He will fly out from Liverpool for the San Francisco concert to share his unique and fascinating eight-year experience of working alongside Brian Epstein and the Fab Four.

You and Mardi Gras