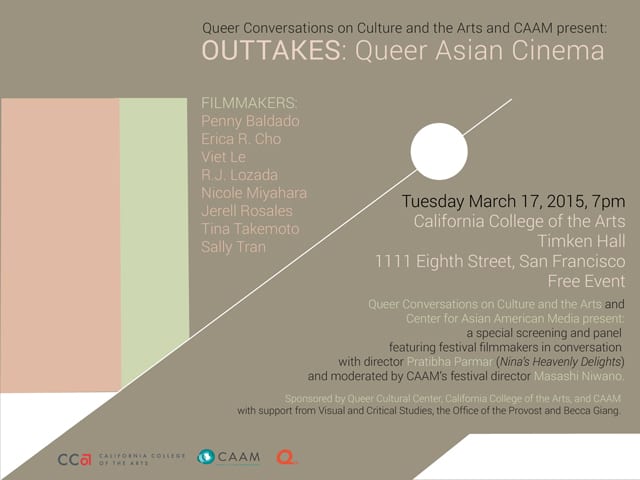 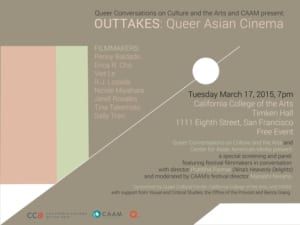 Queer Conversations on Culture and the Arts  and CAAM present a special screening and panel featuring festival filmmakers in conversation with director Pratibha Parmar and moderated by Center for Asian American Media’s festival director Masashi Niwano.

British filmmaker Pratibha Parmar has spent more than 20 years behind the camera bringing fresh perspectives to stories of women, minorities and social issues. Her award-winning work has been exhibited widely at international film festivals and broadcast in many countries. NINA’S HEAVENLY DELIGHTS is her award winning feature film debut.

Masashi Niwano is the Festival & Exhibition Director for the Center for Asian American Media (CAAM). He is a Bay Area native who holds a Bachelor’s Degree in Film Production from San Francisco State University. Prior to re-joining CAAM as Festival & Exhibition Director, Masashi was the Executive Director for the Austin Asian American Film Festival. He is also an active filmmaker, who has worked on numerous films and music videos that are official selections at Outfest, Newfest & South By Southwest.

The Center for Asian American Media (CAAM) is a non-profit organization dedicated to presenting stories that convey the richness and diversity of Asian American experiences to the broadest audience possible. We do this by funding, producing, distributing and exhibiting works in film, television and digital media.

OUTTAKES: Queer Asian Cinema is sponsored by The Graduate Program in Visual & Critical Studies at California College of the Arts, Becca Giang, The Office of the Provost, Queer Conversations on Culture and the Arts, Center for Asian American Media and The Queer Cultural Center.

Jerell Rosales is an emerging Filipino-American Film/TV writer and director whose short films have been been officially selected in over 30 film festivals worldwide and hailed in THE HUFFINGTON POST as a “demonstration of Rosales’ solid skill as a rising filmmaker.”

Nicole Miyahara is an ethnographic filmmaker living in Los Angeles who grew up in the Silicon Valley. She recently graduated with her Masters in Visual Anthropology from the University of Southern California.

Tina Takemoto is an artist and associate professor of visual studies at California College of the Arts in San Francisco. Her work examines issues of race, queer identity, memory, and grief. Her current project explores the hidden dimensions of same-sex intimacy and queer sexuality for Japanese Americans incarcerated by the US government during World War II.

Sally Tran is a 2nd generation Vietnamese-American gender-queer queer filmmaker from the East Bay Area of California. They received their Bachelor of Arts at University of California, Santa Barbara with a major in Feminist Studies and Asian-American Studies minor. Sally is an activist/artivist who strives to promote qtpoc visibility, specifically queer/trans* Asian visibility throughout Sally’s film and writing.

Erica Cho is a filmmaker, animator, and visual artist.  Erica Cho received a MFA in Studio Art with an emphasis in experimental film and animation from UC Irvine and a BFA in Art from Pennsylvania State University as a University Honors Scholar.

Penny Baldado, Filmmaker and owner of Cafe Gabriela in Oakland, reveals her 3-year battle for political asylum on the basis of sexual orientation and gender discrimination. The film captures Baldado’s courage, dogged determination and victory at the intersection of immigrant, civil and human rights.

Việt Lê is an artist, writer, and curator. Lê is an Assistant Professor in the Visual Studies Program, Visual & Critical Studies Graduate Program at California College of the Arts (San Francisco , Oakland). Lê received his M.F.A. from the University of California, Irvine, where he has also taught Studio Art and Visual Culture courses. He received his M.A. and Ph.D. from the University of Southern California (Department of American Studies & Ethnicity).