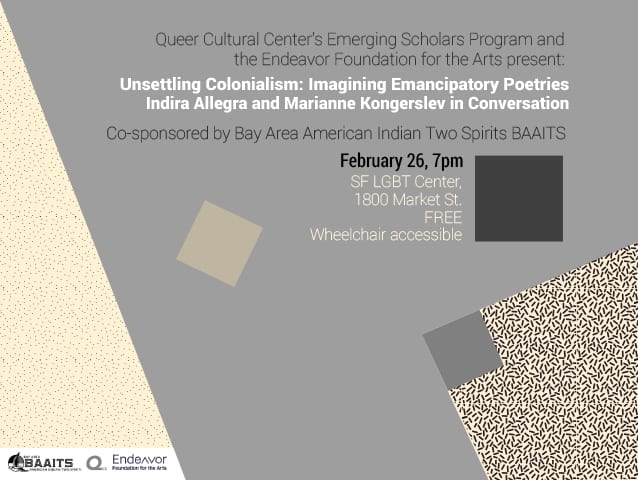 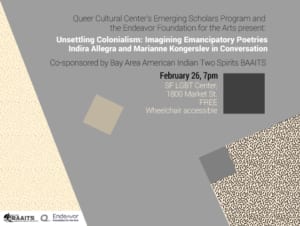 Indira Allegra is the winner of the 2014 San Francisco Foundation Jackson Literary Award, a former Lambda Literary Fellow and recipient of the Oakland Individual Artist grant. In 2013, Indira was interviewed by BBC Radio 4 for Poetry of Gold and Angels, a segment on poetry in the San Francisco Bay Area. Allegra’s short films have screened at festivals such as MIX NYC, Perlen Hannover LGBT Festival, Outfest Fusion and Bologna Lesbian Film Festival. She has been actively involved in guest residencies and lectures at the University of Oregon, East Carolina University and The Banff Centre in Canada. Her group exhibitions include the Commonwealth Club of San Francisco, SOMArts, and Oliver Art Center in the Bay Area. indiraallegra.com

Marianne Kongerslev is a PhD fellow at the Center for American Studies at the University of Southern Denmark. Her dissertation is tentatively titled “From Trickster to Two Spirit: Narratives of Gender and (Trans)Nationalism in Native American Women’s Literature”. In addition to Native American studies, her research interests lie within American literature broadly, (post)colonial literatures, gender/queer studies, and cultural studies.

This Program is sponsored by the Endeavor Foundation for the Arts.