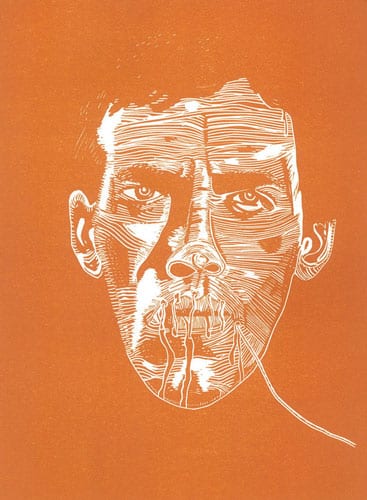 I saw LJ Roberts’ embroidered portrait “Censorship Protest Mask (David Wojnarowicz)” at Not Over: 25 Years of Visual AIDS at LaMaMa Galleria in New York City in 2013, which recalled both Wojnarowicz’s resistance art and the activism in response to the censorship of his film. Roberts’ stitched image was based on a mask you could download during the protest of Wojnarowicz’s film, A Fire in My Belly, by the National Portrait Gallery in late 2010. Censorship Protest Mask (David Wojnarowicz). Embroidery on Cotton 2011. LJ Roberts. The Visual AIDS show connected me with the anger of censorship, AIDS erasure, and the overwhelming loss of people and art. The show’s force was in its work against historicizing AIDS. AIDS is ongoing, and the ripples of it are as well. When an artist who has been dead for years has their work censored by a major arts institution, it reinvigorates resistance against silence and erasure. It reminds us that just as AIDS is in the present, so to must our work be to address the underlying and related issues that contribute to it, such as poverty, homophobia, and racism.