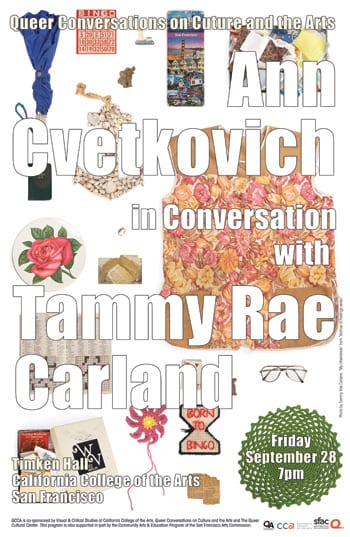 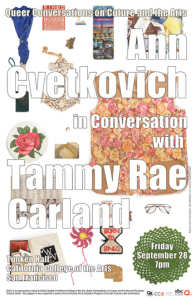 Queer Conversations on Culture and the Arts presents:
Ann Cvetkovich in Conversation with Tammy Rae Carland

I always want people to take their own connections seriously. There is a kind of political depression that can come from the sense of belatedness we discussed earlier: “they had this special set of relations and we don’t.”  With respect to queer art worlds, for example, people will turn to Paris modernism in the 1920s with Gertrude Stein and Alice B. Toklas, Natalie Barney, Renée Vivien. People look to the 1950s in New York with the Beats and the abstract expressionists. Or later with Andy Warhol and the Factory. There is still a tremendous amount of scholarship to be done just to fully excavate those queer social worlds. But I want that work not to mystify those worlds but instead to provide enabling models for you and me having this conversation or for the conversations I have with my friends. We are having a salon right here, right now just as they had in Paris in the 20s, or in New York in the 50s and 60s. Everyone was important to those networks, not just the big famous dudes… – Ann Cvetkovich

Ann Cvetkovich is Ellen Clayton Garwood Centennial Professor of English and Professor of Women’s and Gender Studies at the University of Texas at Austin. She is the author of Mixed Feelings: Feminism, Mass Culture, and Victorian Sensationalism (Rutgers, 1992), An Archive of Feelings: Trauma, Sexuality, and Lesbian Public Cultures (Duke, 2003), and Depression: A Public Feeling (Duke, 2012). She co-edited (with Janet Staiger and Ann Reynolds) Political Emotions (Routledge, 2010), and she has been coeditor, with Annamarie Jagose, of GLQ: A Journal of Lesbian and Gay Studies.

An Archive of Feelings contends that the field of trauma studies, limited by too strict a division between the public and the private, has overlooked the experiences of women and queers. Rejecting the pathologizing understandings of trauma that permeate medical and clinical discourses on the subject, Cvetkovich develops instead a sex-positive approach missing even from most feminist work on trauma. She challenges the field to engage more fully with sexual trauma and the wide range of feelings in its vicinity, including those associated with butch-femme sex and aids activism and caretaking.

In Depression: A Public Feeling, Ann Cvetkovich combines memoir and critical essay in search of ways of writing about depression as a cultural and political phenomenon that offer alternatives to medical models.

Cvetkovich draws on an unusual archive, including accounts of early Christian acedia and spiritual despair, texts connecting the histories of slavery and colonialism with their violent present-day legacies, and utopian spaces created from lesbian feminist practices of crafting. She herself seeks to craft a queer cultural analysis that accounts for depression as a historical category, a felt experience, and a point of entry into discussions about theory, contemporary culture, and everyday life. Depression: A Public Feeling suggests that utopian visions can reside in daily habits and practices, such as writing and yoga, and it highlights the centrality of somatic and felt experience to political activism and social transformation.

Tammy Rae Carland is an artist who primarily works with photography, experimental video and interdisciplinary materials dealing with issues of marginalization, affect and more recently performance and comedy. She has screened and exhibited her work internationally and was recently included in the 12th Istanbul Biennale in Turkey, Seeing Gertrude Stein at the Contemporary Jewish Museum and the Bay Area Now 6 exhibition at Yerba Buena Center for the Arts in San Francisco. In the 1990’s Carland independently produced a series of influential fanzines, including I (heart) Amy Carter and from 1997-2005 co-ran Mr. Lady Records and Videos, an independent record label and video art distribution company dedicated to the production of feminist and queer culture. Tammy Rae Carland received her MFA from UC Irvine, her BA from The Evergreen State College in Olympia Washington and attended the Whitney Independent Study Program in New York City. She is a Professor at the California College of the Arts where she also Chairs the Photography Program.

I’m Dying Up Here
“In her most recent photographic series, Carland’s isolated figures live in an unsettled state, seemingly caught mid-act. The figures rest between being obscured and exposed by the heavy dark cloaking of the background. Each background is both visible and invisible, with subtle texture only coming into focus as one approaches the photograph. Even when there is no figure present, the environments in each image lie in waiting for something, giving one the sensation of anticipation, fear and self-doubt that accompany the act of performing.” – Julie Henson of the DAILYSERVINGS

Funny Face I Love You
“A foundation for Carland’s project was the link between Roland Barthes’ punctum—that elusive traumatic element that allows certain photographs to relate rather than just represent—and the punch line, the zinger that connects a joke to a more complicated narrative. This punctum/punch line wordplay highlights the wound central to each etymology: in the former a Biblical wound that made Christ human, in the latter an ultimate provocation that is equivalent to a punch.

Funny Face I Love You arrives at a crucial moment in the photographic crisis; there is an excess of creative imagery right now, so much so that we require aggregators to help sort through the madness. Yet projects like Carland’s document the historical affect of an aesthetic transition, from the punctum’s wounded mourning to the punch line’s stab of defiance.” – Dena Beard Art Practical