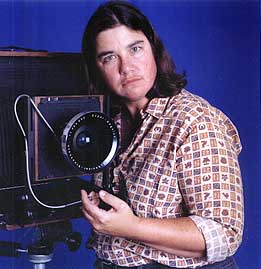 Catherine Opie was born in 1961 in Ohio. She received her MFA from CalArts in 1988. Her solo exhibitions include LA Freeways (San Francisco) and Being and Having (New York). Her work has appeared in group exhibitions from Paris to Australia to New Orleans, including the 1995 Whitney Museum Biennial in New York and In a Different Light at the University Art Museum in Berkeley in 1995. She lives in Los Angeles and is on the staff of the University of California, Irvine.

In the late eighties to mid-nineties Opie gained national attention for her large format portraits of dyke daddies, gay male performance transvestites, FTM transexuals, tattooed and scarified gay men and lesbians and other members of a social milieu where sexual identity is most dramatically thrown into question. In a non-confrontational manner, Opie’s places her subjects clearly and calmly in the center of focus. Her subjects appear to reverse the gaze–outwardly toward the viewer.