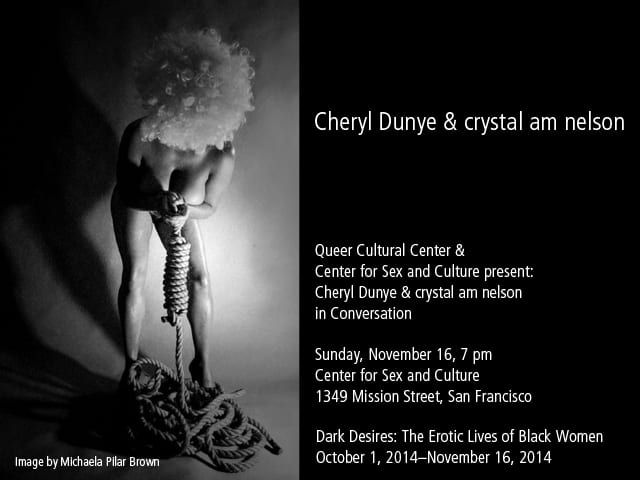 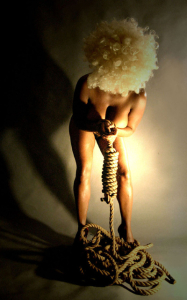 The Emerging Scholars Program (ESP) is being held in conjunction with Center for Sex and Culture’s Dark Desires Exhibition curated by am nelson.

What is the role of desire in the lives of black women (cis, trans, and woman-identified)?

We also have invited artists from around the country who work in a range of media—photography, drawing, video, collage, and sound sculpture—to bring into relief the ways in which contemporary visual artists and their black female (identified) subjects are engaging with this history and self-defined notions of the erotic, pleasure, desire and their uses in their own lives and in the worlds through which they circulate. In this portion of the exhibition we present Michaela Pilar Brown, whose large-scale color photographs explore the ways in which history and memory leave traces on and through the body; Rashayla Marie Brown, whose photographic and video performance works included here subverts the power dynamics of the Gaze and reveals the tensions that engorge desire in search of an object; Ajuan Mance, whose drawings of men she meets on the streets of the Bay Area challenges conventional notions of where queer black female desire is located; Megan Morgan, whose practice grapples with the eroticization of visibly miscegenated bodies and the sexual histories they expose; Nanci Nwamaka Ikejimba Muraoka, whose sound sculptures explore sexual experimentation and discovery between and among black women; co-founder of the entertainment and lifestyle network Black&Sexy TV, Numa Perrier, whose selfies are a testament to the ways back women not only see themselves, but also desire to be seen; Keisha Scarville, whose black and white photographs present the body as the primary site where pleasure and trauma collide and entwine; Cascade Wilhelm, a white artist whose nude photographic portraits of the curator—a queer black woman—disrupt commonly accepted notions of racial and sexual objectification; and Visions from the New California award winning artist Suné Woods, whose new large-scale collages mine desire as something that is at once sexual, sensual, and political. – See more at: http://www.sexandculture.org/gallery#sthash.ME2TE9Ax.dpuf