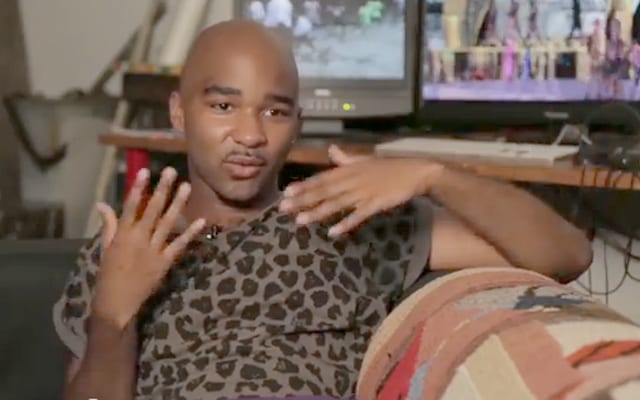 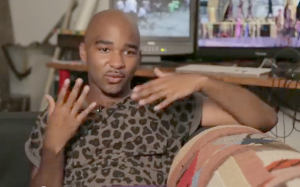 How does an artist use digital technology to perform new identities? In this film, artist Jacolby Satterwhite crafts surreal 3D animated videos while transporting characters from his virtual worlds into the streets of New York City. “We’re in the age of the remix,” says the artist, who observes that “now it’s about how you use the information around you to generate your individuality.” At a modest computer setup in his Chinatown studio, Satterwhite digitally traces by hand his mother’s schematic drawings of inventions, reimagining them into baroque, neon-colored landscapes in a constant state of flux. Adapting additional visual references—home movies, family photos, documentary footage, and images throughout art history—Satterwhite “queers” the purpose and meaning of his source material, creating a unique personal mythology through stream of consciousness storytelling techniques. Recording himself in front of a green screen, the artist populates his videos with multiple avatars of himself who, in movements reminiscent of voguing in the ball scene, activate objects into wordless scenes of transformation and desire. In spaces throughout the city—the Brooklyn Bridge, Chinatown, Little Italy, Union Square subway station, and a Recess event at Le Poisson Rouge in Greenwich Village—Satterwhite also engages the public in the persona of his freewheeling avatar, wearing a custom-made costume outfitted with iPads and iPhones that loop the artist’s videos. Simultaneously flamboyant provocations and a natural extension of his process, Satterwhite treats these spontaneous encounters in the city as a sketchbook that will inform future animations. Featuring scenes from the works “Country Ball” (1989–2012), “The Matriarch’s Rhapsody” (2012), “Reifying Desire 3” (2012), “Reifying Desire 4” (2012), “Reifying Desire 5” (2013), and “Reifying Desire 6” (2013).

“New York Close Up” is supported, in part, by the New York City Department of Cultural Affairs in partnership with the City Council; The Lambent Foundation; Toby Devan Lewis; the Dedalus Foundation, Inc., The Andy Warhol Foundation for the Visual Arts, and by individual contributors.

There has been a problem with your Instagram Feed.
Jewelle Gomez @ Bead by Bead: Native Writing