Jerome: An Appreciation
Five years after his death, Jerome Caja’s art lives on 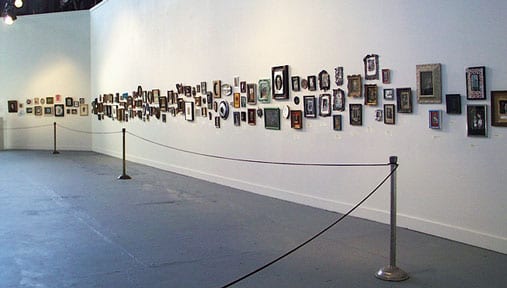 My encounters with Jerome Caja (pronounced ‘Chaya,’ which rhymes with Maya) read like a chapter from Armistead Maupin’s Tales of the City. I first became aware of Jerome the Performance Artist soon after moving to San Francisco in the mid-80s. He was hard to miss in the Pride Parade, wrapped in saran, caked in geisha girl makeup, or carrying a clear plastic parasol. I knew of him by reputation as the one who did outrageous drag high-heeled wrestling performances at SoMa bars, or appeared naked at the San Francisco Art Institute.

Later that decade, I saw his face daily during and after my morning swim in the basement pool of the International Center near my workplace, the old San Francisco Museum of Modern Art. From my vantage point in the (highly public) men’s shower stalls, I would observe his blond Rapunzel tresses, and then his bright blue eyes, appearing around the corner of the door that led to the showers from the men’s locker room. His position there as a custodial worker must have afforded him myriad visual pleasures, as he watched the legions of nude men come and go, and (as in the case where any bunch of naked guys get together in San Francisco) often excite each other.

By then I was becoming aware that he was a visual artist as well. When I saw a reproduction of “Flossing with Jesus” right here in the pages of the BAR, I knew that this was a person with a unique vision, and I yearned to know more. That opportunity came my way when SFMOMA acknowledged him officially, incorporating some of his work into its exhibitions, thanks to the perceptive curatorial eye of Bob Riley, then the Media Art Guy at the museum, and to the late John Caldwell, who was Chief Curator. Jerome and I found ourselves eyeball-to-eyeball as we addressed together matters of the installation of his extremely unconventional artworks on the gallery walls. As someone who was trained in the classical school of art conservation, I took a deep breath as I watched him solve framing problems by adding yet another layer of wide masking tape to the back of one of his artworks which would just not stay put in its funky, velvet-lined frame.

In the meantime came the Beehive restaurant in the lower Haight, which was like a Jerome-land theme park. There were more exhibitions of his artwork at Southern Exposure, at Gallery Paule Anglim, and elsewhere. I visited his Hayes Valley home studio, with its forest of nail-polish bottles underfoot, and floor-to-ceiling Jeromes on the walls. I pestered him at every encounter to sell “Flossing with Jesus” to me. His answer was typically evasive. “I’ll tell you the piece after three more visits to you at the conservation studio.” He was like Miss Fortune, whom he impersonated during his last Paule Anglim installation. Telling my faux fortune at that time, his eyes opened wide as he turned over his homemade tarot cards and told me, laughing, that I wouldn’t get out of the gallery alive.

It was the last time I ever saw Jerome. He bequeathed “Flossing with Jesus” to me when he died in November 1995 and I was living in London. He told Bob Riley that he was giving it to me because I’d wanted it (breathless Marilyn voice here) “for sooo looooong.” Bob told me that, although Jerome had lost his eyesight and was extremely frail, he literally gave off a glow.

I gained profound insights into the artist and the human being during a recent talk with Thomas Avena and Adam Klein, authors of the 1996 Jerome: After the Pageant (Bastard Books/Distributed Art Publishers). We met at SomArts Gallery during their recent exhibition, Odyssey and Underworld: The art of Jerome Caja, Charles Sexton and Thomas Plagemann,part of the National Queer Arts Festival 2000. Although their curatorial credentials were limited and they found the experience exhausting Klein and Avena were well-qualified to present Jerome to his adoring public. As friends and ultimately caretakers to the artist, musician/writer Klein and poet Avena had intimate knowledge of Jerome and his artistic process.

A long, white wall of the gallery was hung, salon-style, with almost 200 tiny framed icons by Jerome, and a series of pedestals held the more fragile objects, like a bottle-cap checkerboard, as well as flat works on paper, within plexiglass vitrines. Surrounding the works of Jerome were the works of two other artists. Jerome’s friend and muse the late Charles Sexton was represented by paintings and graphic works wherein the degradation of the body due to HIV is portrayed with an awesome beauty. Sexton was also literally present in several works by Jerome which incorporate his ashes as part of the painting medium. On a third wall, the curators presented sepia drawings by Thomas Plagemann, whose deceptively traditional looking works on parchment address the AIDS crisis in terms of machine-age warfare.

But there was no doubt that Jerome was the star of the show. The curators made it clear that the exhibition was not intended as a memorial, but a living tribute to the artist whose production is still, or perhaps even more, relevant now, almost five years after his death.

The images are gallery shots from “Odyssey and Underworld,”
The Art of Jerome Caja, Charles Sexton and Thomas Plageman

So how about those paintings? It is probably no accident that, when translated, Hieronymous Bosch shares a first name with Jerome. To enter Jerome’s paintings is to be transported into the world of the artist’s naked desires and fantasies, coupled with an anti-clerical irreverence that turns Roman Catholic iconography inside out. Although small in scale (Jerome ignored advice from his art instructors to work larger), they are huge in impact.

In, “The Safe Banana Ascending,” a condom-wearing fruit takes wing like a baroque saint. “Alice Jacking off Her Rabbit— leads Lewis Carroll’s heroine farther down the rabbit hole than the author ever intended. “The Birth of Venus in Cleveland” features a Jerome self-portrait as a hermaphrodite goddess posing in front of a clothesline full of men’s jockey shorts. In “Bozo Fucks Death,” a smiling, paunchy clown plows into the bony hole of an equally happy skeleton who holds a crucifix with a happy face, while a smiley face Madonna looks on approvingly from a nearby corner.

The materials, too, are surprising. “Venus” is painted with shiny nail-polish on a small plastic tip tray. “The Foot of Christ” is enamel spread with a tiny brush onto the lumpy surface of Jerome’s own toe-nail clippings. A band-aid from a HIV-test puncture becomes a mini-shroud of Turin, or the blood stain the red nose of a Bozo. The mats and frames are the stuff of thrift stores and the textures of a drag queen’s closet: velvet and lace bounds as a background for some of the most outrageous subject matter. Trained as a ceramist, Jerome loved to use craft like materials to create his two-dimensional works. The effects that he could achieve with nail-polish and eye-liner, in combination with more traditional media like gouache and watercolor, are astonishing.

The paintings are outrageous and sometimes cartoonish, but Jerome was no naive painter. Art-historical references abound; besides Bosch and Breugel, and the obvious Spanish and Italian floating saints, there is Goya. Jerome’s “Charles Devouring Himself” is a reworking of Goya’s “Saturn Devouring One of His Children” at the Prado. This powerful piece, presented appropriately on a metal luncheon plate, shows a young, AIDS-afflicted artist (Sexton) as a cannibal consuming himself. Cannibalism is a recurrent theme, including a long panorama up and down the food chain; the humor of “Eggs Having Turkey Dinner” disguises the darker theme, but a view of a gasping yellow bird being devoured by worms (in “Revolution in the Food Chain”) puts it right in your face.

His art retains an immediacy today, both as a document of a time of plague in San Francisco and as a celebration of sexuality. Jerome had an indomitable spirit. A victim of rape and a gunshot wound, as well as the disease that took his vision and eventually his life, Jerome “roared right through,” note Klein and Avena, never letting the “personal get in the way of the artistic. He was totally present in the moment, free of envy and fear.”

Like most visionaries, Jerome’s art is only slowly becoming recognized by the art establishment. He had an fervent desire to have as much of his legacy as possible enter museum collections. In addition to the the paintings which are now in the permanent collection of SFMOMA, over 40 of his works on paper now form part of the Smithsonian Institution’s Archives of American Art. Jerome Caja will also be included in an upcoming exhibition at the Los Angeles County Museum of Art. 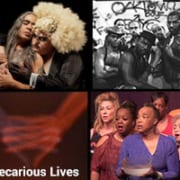 There has been a problem with your Instagram Feed.
Torreya Cummings