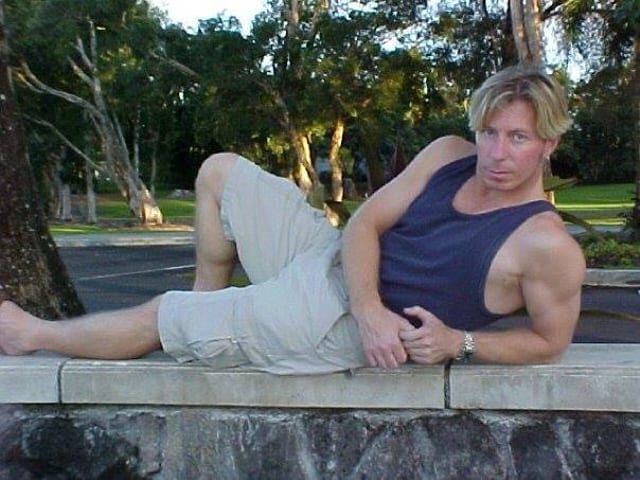 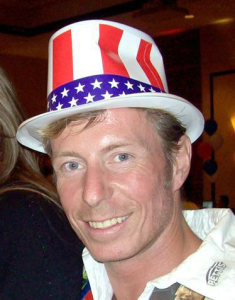 Kurt Barrie, a significant queer Democratic Party activist, died December 15, 2014 of AIDS-related causes at 48. Barrie was born in Auburn California in 1966, and escaped an abusive childhood at 15, traveling around the country and ending up in San Francisco. Though he never went to college, Barrie was a brilliant political strategist who came in to his own in developing grass roots political campaigns, often with armies of local volunteers. A charismatic, warm and bubbly presence, Barrie was also famously handsome, quick –witted and a passionate fighter against injustice of all stripes. Once in San Francisco, Barrie quickly became involved in local politics, both as an aid to San Francisco Supervisor Harry Britt (the man appointed to fill Harvey Milk’s seat following his assassination) and as architect of one of the most important precursors to queer marriage, domestic partnership legislation. He was chief strategist for the Yes on K campaign in 1990, the first successful domestic partnership law in San Francisco and one of the first in the country, and successfully defended that legislation against repeal a year later. Barrie went on to serve in San Francisco Mayor Frank Jordan’s office as special assistant and liason to the LGBTQ community. He helped push through one of the nation’s first needle exchange programs and was active in the Lavender Sweep that saw Carol Migden and Roberta Achetenberg elected to the Board of Supervisors, Donna Hitchen’s to Superior Court judge and Tom Ammiano to the San Francisco School Board, the most significant string of queer political victories in San Francisco since the initial election of Harvey Milk.

A committed community activist , Barrie moved to Palm Springs, and there founded the Palm Springs Democratic Club, helping elect Ron Oden as the city’s first gay African American mayor in 2003. He led several other activist endeavors to victory in Palm Springs, including the Save our Mountains Campaign. Barrie is survived by his beloved sister Tonie “Lizzard” Barrie and legions of friends, including Clay Baker and his ex Jonathan D. Katz. He died in Palm Springs.

A scholarship fund to support a college student doing a summer of community activism is being set up in his memory. 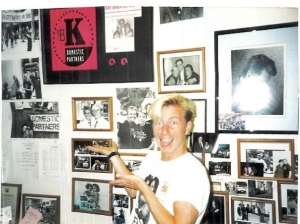 Kurt Barrie – 1991 in his City Hall Office, he served as Special assistant to SF Supervisor Harry Britt and was also Legislative Aide to Britt. Supervisor Britt was appointed to fill the remaining portion of slain Supervisor Harvey Milks seat. Milk was the first openly Gay Man elected to Office, and was killed by fellow SF Councilman Dan White, a former SF Cop who was homophobic and troubled over Harvey Milks popularity on the Council. White resigned his position on the Board, and then later requested Mayor Moscone to re-appoint him back to the seat he resigned, when Mayor George Moscone declined to do so, White crawled into a basement window at City Hall and went to the offices of Moscone and Milk shooting and killing both of them in the Historic Twinkie Defense Trial. (From Kurt Barrie’s Facebook Page – downloaded 12/27/2014 by RL) 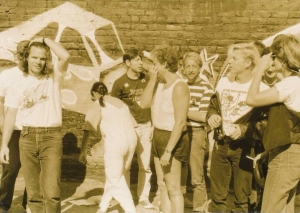 Kurt Barrie with friends and allies circa 1989.

In 1989, the earthquake and uncertainty about health benefits killed the domestic partnership measure. This year, lesbian and gay voters had many reasons to go to the polls. Not only would Proposition K be on the ballot, but 1990 offered the possibility of electing the first openly gay man to the Board of Education (Tom Ammiano) and two lesbians to the Board of Supervisors. One was (Roberta) Actenberg. The other was Carol Migden, who had been active in the domestic partnership referenda campaigns. In addition, another lesbian was running for a judgeship on the Superior Court (Donna Hitchens). No citywide election since 1977, when Harvey Milk was elected, was as important to the San Francisco’s lesbian and gay community. (from: Gay Politics, Urban Politics: Identity and Economics in the Urban Setting by Robert W. Bailey) Photo: courtesy Michael Bosia.