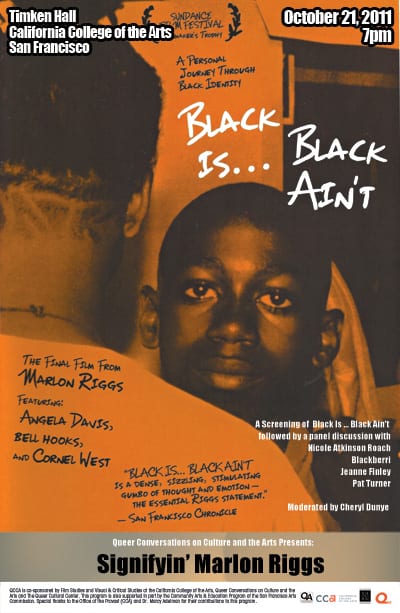 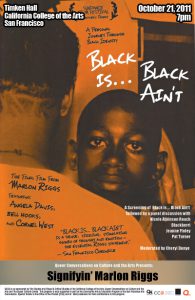 The panel, moderated by filmmaker and CCA faculty member Cheryl Dunye, will discuss the importance of Riggs’s work and its relevance today for artists and activists who continue to struggle with issues of race and homophobia.

“As long as I have work then I’m not going to die, cause work is a living spirit in me — that which wants to connect with other people and pass on something to them which they can use in their own lives and grow from.” — Marlon Riggs, Black Is Black Ain’t

Organized by Cheryl Dunye and Rudy Lemcke, board members of the Queer Cultural Center.

Before his death, Marlon Riggs forged a position as one of the more controversial figures in the recent history of public television. He won a number of awards for his creative efforts as a writer and video producer. His theoretical-critical writings appeared in numerous scholarly and literary journals and professional and artistic periodicals. His video productions, which explored various aspects of African-American life and culture, earned him considerable recognition, including Emmy and Peabody awards. Riggs will nonetheless, be remembered mostly for the debate and contention that surrounded the airing of his highly charged video productions on public television stations during the late 1980s and early 1990s. Just as art-photographer Robert Mapplethorpe’s provocative homoerotic photographs of male nudes caused scrutiny of government agencies and their funding of art, Marlon Riggs’s video productions similarly plunged public television into an acrimonious debate, not only about funding, but censorship as well.

About Black Is … Black Ain’t

Before his death Marlon Riggs began work on a production entitled Black Is, Black Ain’t. In this video presentation Riggs sought to explore what it meant to be black in America, from the period when “being Black wasn’t always so beautiful” to the 1992 Los Angeles riots. This visual reflection on gumbo, straightening combs, and Creole life in New Orleans, was Riggs’s own personal journey. It also unfortunately served as a memorial to Riggs. Much of the footage was shot from his hospital bed as he fought to survive the ravaging effects of AIDS. The video was finished posthumously and was aired on public television during the late 1990s.

“Riggs asks, “If people is like gumbo, then what is the roux, that special ingredient that binds and gives everything its unique flavor?” Riggs refuses to tell us; he keeps his recipe for roux secret. Instead of offering quick and easy solutions, Black Is…Black Ain’t constructs and enacts multiple and often contradictory positions. In so doing, the film places the viewer in the middle of a shifting, complex, and above all, rich world of blackness in the late twentieth century. From this vantage point, the viewer is encouraged to experience the many ways in which black is…and black ain’t and begin a dialogue long overdue, one which will allow each of us the freedom to pursue our own special recipe for self-definition.” – Pat Turner

Queer Conversations on Culture and the Arts brings together locally and nationally renowned artists, writers, filmmakers, and scholars for a series of conversations to discuss a broad range of LGBTQI topics in the humanities and the arts.

QCCA is co-sponsored by the Film Program and Visual & Critical Studies at the California College of the Arts, Queer Conversations on Culture and the Arts and The Queer Cultural Center. This program is also supported in part by the Community Arts & Education Program of the San Francisco Arts Commission.

Special thanks to the Office of the Provost (CCA) and Dr. Marcy Adelman for their contributions to this program.

Jeanne C. Finley is a media artist who works in experimental and documentary forms, including film, video, photography, installation, Internet, and site-specific public works. Her work has been exhibited in such international institutions as the Guggenheim Museum, San Francisco Museum of Modern Art, and New York Museum of Modern Art, Whitney Museum, and the George Pompidou Center. She has received many grants, including a Rockefeller Media Arts Fellowship, Guggenheim Fellowship, Creative Capital Foundation, Cal Arts / Alpert Award, National Endowment for the Arts Fellowships, and the Phelan Award.

Dr. Turner has served as a consulting scholar on several documentary film projects. She conducted research for and appeared on camera in Marlon Riggs’s award-winning films, Ethnic Notions  and Color Adjustment.  Most recently, she was interviewed in Portrait of the Artist: Riché Richardson, a documentary on the renowned quilter.  She participates in the Scholarly Voices lecture series at the Museum of the African Diaspora in San Francisco.

Turner’s commentary on issues related to folklore, rumor, and popular culture is frequently sought by print, radio and television journalists. Her recent New York Times op-ed on the film The Help was among the week’s most visited and e-mailed stories.  She has been interviewed for stories in the New York Times, Boston Globe, Chicago Tribune, LA Times, Washington Post, Wall Street Journal, Newsweek, and many other prominent publications; and has given dozens of radio interviews including features on Fresh Air, Talk of the Nation, and All Things Considered. She has appeared on the NBC Nightly News, the CBS Evening News, the O’Reilly Factor; and I Heard It Through the Grapevine inspired a story on ABC’s 20/20.

Emmy-award winning Producer, Director, Editor, Nicole Atkinson Roach has spent the past two decades working on a variety of documentaries, news, training and promotional videos for web, broadcast and corporate audiences. Her PBS documentary credits include her work with the late Emmy-Award winning director, Marlon Riggs. Atkinson co-produced, Black Is . . . Black Aint, a feature-length documentary on African American identity that received the Filmmaker’s Trophy Award at the 1995 Sundance Film Festival, Best Overall Film and Best Documentary at Black Filmmakers Hall of Fame, and a Golden Gate Award from the San Francisco International Film Festival. Atkinson also worked with Riggs as production assistant, assistant editor and researcher, and associate producer and editor on the Peabody Award-winning documentary, Color Adjustment. The two collaborated again on the award-winning Non, Je Ne Regrette Rien (No Regret), about HIV disclosure in the black community. Her other documentary credits include producing and directing Word of Mouth, and Lockin’ Up. In 2000, she received a Regional Emmy Award for a short video that she wrote, produced and directed for KQED-PBS as part of their Y2K series. Her other work with KQED also included producing segments for SPARK and Bay Window series. Atkinson Roach graduated with a Masters Degree in Journalism from the University of California at Berkeley and has a Bachelors Degree in Mass Communications from the University of California at Los Angeles. She has taught video production at the University of California at Berkeley’s, Graduate School of Journalism; University of San Francisco and Academy of Art University.

Blackberri has been one of the most visible black queer artists in the country. He is a pioneer in Gay music. His 1st big appearance was in 1975 on KQED’s first gay music concert Two Song Makers, splitting the headliner duties with the late Steven Grossman. Blackberri has shared the stage with many great musicians such as Carlos Santana, Bo Diddley, Linda Tillery, Mary Watkins, Gwen Avery, and Holly Near.  He’s appeared in the Music of the Americas Festival, featuring Silvio Rodriqez and other world renowned musicians in Cuba at the 1997 World Youth Festival. Blackberri has toured both coasts and all points in between.  His overseas performances have been enjoyed in Europe, Canada, Cuba, and several Central American countries. This international musician’s music has traveled the world on records like Blackberri and Friends Finally to award-winning  films like Looking for Langston. His song “Eat the Rich” won the National Academy of Songwriter’s competition award. Blackberri appeared in several Marlon Riggs films including, Tongues Untied, Affirmation, Anthem, No Regret, and Black is Black Ain’t.

Cheryl Dunye, a native of Liberia, holds an MFA from Rutgers University. Her third feature film, Miramax’s My Baby’s Daddy, was a box-office success. Her second feature, HBO Films’ Stranger Inside, garnered her an Independent Spirit award nomination for best director. Cheryl’s debut film, The Watermelon Women, was awarded the Teddy Bear at the Berlin International Film Festival. Her other works have premiered at film festivals and museums worldwide.

Cheryl served on the boards of Outfest (producers of the Los Angeles Gay & Lesbian Film Festival), the DGA, and the IFP. She has been honored with a Community Vision Award from the National Center for Lesbian Rights (NCLR), awarded a Creative Excellence Award from Women in Film and Television, and was issued a Fusion Award from Outfest and was selected as one of POWER UP’s 2008 Top-10 Powerful Women In Showbiz. 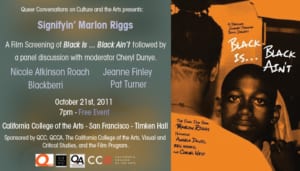