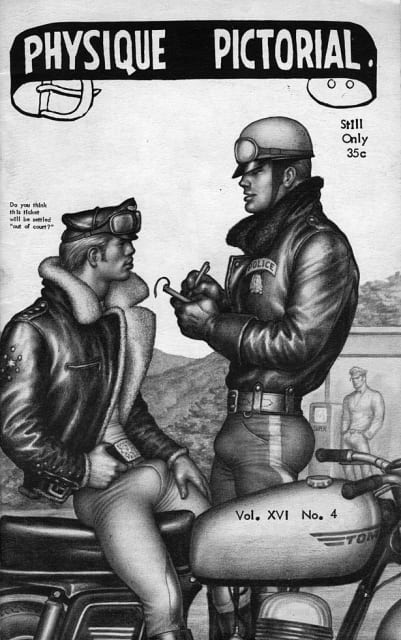 MOCA presents Bob Mizer & Tom of Finland, the first American museum exhibition devoted to the art of Bob Mizer (1922–1992) and Touko Laaksonen, aka “Tom of Finland” (1920–1991), two of the most significant figures of twentieth century erotic art and forefathers of an emergent post-war gay culture. The exhibition features a selection of Tom of Finland’s masterful drawings and collages, alongside Mizer’s rarely seen photo-collage “catalogue boards” and films, as well as a comprehensive collection of his groundbreaking magazine Physique Pictorial, where drawings by Tom were first published in 1957. Organized by MOCA Curator Bennett Simpson and guest co-curator Richard Hawkins, the exhibition is presented with the full collaboration of the Bob Mizer Foundation, El Cerrito, and the Tom of Finland Foundation, Los Angeles.

Tom of Finland is the creator of some of the most iconic and readily recognizable imagery of post-war gay culture. He produced thousands of images beginning in the 1940s, robbing straight homophobic culture of its most virile and masculine archetypes (bikers, hoodlums, lumberjacks, cops, cowboys, and sailors) and recasting them—through deft skill and fantastic imagination—as unapologetic, self-aware, and boastfully proud enthusiasts of gay sex. His most innovative achievement though, worked out in fastidious renderings of gear, props, settings, and power relations inherent therein, was to create the depictions that would eventually become the foundation of an emerging gay leather culture. Tom imagined the leather scene by drawing it; real men were inspired by it… and suited themselves up.