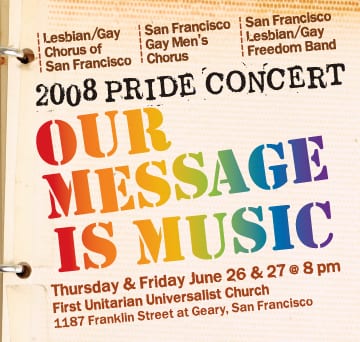 In 1978, in the white-heat of the San Francisco Gay Revolution, a rainbow flag ws unfurled for the first time on the Gay Pride Parade and Harvey Milk marched into office. On the night of his assassination, the San Francisco Gay Men’s Chorus gathered on the steps of City Hall and gave a new voice to the dignity of a community. Thirty years later, we invite you to share the memories of a generation and a vision of a world without hate as we proudly celebrate our pearl anniverary.

FOLLOW US!
Twilight Vixen Revue and SF Boylesque The TransMarch 2008
Scroll to top