The policies enacted by our current president and Republican controlled Congress have contributed to an increasingly unsafe environment for marginalized people across identities; intensifying anxieties amongst people of color, and queer and trans communities. Recognizing that the government will actively advocate against these communities highlight the need for community-driven resources.

Seattle artist Darius X created Procedures with input from his communities to mobilize people to think critically about self-sabotage, personal isolation, and the choice to engage in (or disengage from) the world, when feeling the weight of forces far beyond individual control.

The journey through Procedures begins by stating the urgency for taking safety precautions. A user’s guide with icons and instructions is provided. Each diorama is hidden in an enclosed wooden box marked with a matching icon from the user’s guide. As you read through the user’s guide, you are invited to open each door to reveal a directive message. 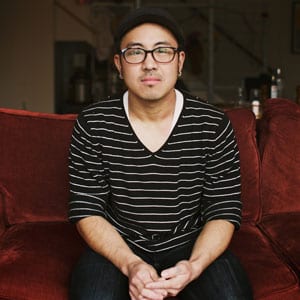 Darius X is a Seattle based visual artist with a passion for printmaking. Drawing inspiration from his personal experience as a queer and trans Korean adoptee his artwork touches on themes of queerness, race, and self-care.

Darius’ love for linoleum block printing started in high school and eventually became a lifelong obsession. He continued his printmaking training, working with Seattle based master printmakers at Day Moon Press and School of Visual Concepts. In 2016 he opened a small storefront, Darius X Studio, where he creates, hosts community events, and sells his work.

He has exhibited throughout the Pacific Northwest, Seoul, S. Korea, Oakland, CA, and St. Paul, MN, and has collaborated and worked closely with several Seattle based queer, trans, and people of color communities including The Wing Luke Asian American Museum, IDEA Odyssey Art Gallery, QPOC Liberation Project and The Bamboo Clan. His artwork has been featured on three book covers written by adoptee activists Janine and Jeanette Vance; “Adoptionland: From Orphans to Activists,” 2014, “The Search for Mother Missing,” 2016, and “Adoption History 101: an Orphan’s Perspective,” 2017.