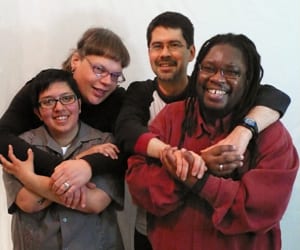 What are the relationships that we form with our families, friends, and lovers as queer people whose racial identities are often ambiguous, exotified and contested? Performers will explore the beautiful moments of resistance within their struggles to love.

Landa Lakes (Chickasaw) is the matron of the Brush Arbor Gurlz aka the BAGz, a Native American Drag ensemble. She is a former Ms Gay Indian Nations, Ms Osage Hills and Ms Trannyshack Starsearch. She has performed throughout San Francisco, Oklahoma and Texas, often introducing audiences to Native American politics through humor. Landa has performed in the Queer Arts Fest’s “Rally The Troupes” for the last 3 years. She often walks the audience through the door way of racial justice and Native American protest with a smile, sly humor and warm embrace.

Leah Lakshmi Piepzna-Samarasinha was raised in Worcester, Massachusetts , the daughter of a Sri Lankan father and an Irish/ Ukrainian mother. After moving to New York for four whirlwind years of coming of age in the middle of riot grrl, queer, anarchist and student of color organizing, she moved to Toronto in 1997 in the hopes of no longer being the only Sri Lankan in the room. Her first book, Consensual Genocide , was published by TSAR Books in April 2006. She believes in the power of the written and spoken word to heal, decolonize and change the world.

Luis Gutierrez-Mock is a queer biracial Chicano FTM who has huge tranny hearts for mixed race queer communities. He sits on the Board of Directors of Interracial Family Pride, an agency serving mixed heritage and transracially adopted youth and their families. The creator of Mixed Fruit Productions, he produces events featuring multiracial queer performers and queer transracial adoptees. In his free time, Luis prances around the Castro with his small gay Chihuahua blend, FancyChuco Florez-Gutierrez-Mock.

Luna Maia is a prolific, queer artist-innovator oriented towards issues of mixed heritage, feminism, and gender identity. She has produced chapbooks History of this Body: Bodies on Fire and Tortixa. She won an Honorable Mention for the Xochiquetzali Poetry Award, awarded to Latina and Native Women, for her poem A Love of the Ancestors. She has featured at Queer Open Mic, K’vetch, RADAR Reading Series, SF in Exile’s: Ink and Femina Poten’s Sizzle. Learn more at www.lunamaia.com

Maceo Cabrera Estévez, has a long list of identities and occupations including being queer, mixed race Cuban, a performance artist, comedian, writer and nanny.   She hails from Brooklyn, NY and now lives in Oakland.  She is the creator of the celebrated play Amor Cubano: In a bottle, a tube and a small packet and her alter ego Barbarita Perales. Her writing has been published in Sojourner: The Women Forum, Riffrag Journal and she edited the Ana Castro: A Radical People of Color Zine. Maceo’s work focuses on revolutionary Cuban love, the politics of being brown and uniting all struggles globally.

Poet/musician/songwriter solidad decosta is an uppity Portuguese woman who isn’t afraid to claim her black latina maternal ancestry. Equal parts street journalist, storyteller and crone-ta-be with leo moon credentials, her work encompasses the why and where of life outside the boxes in a label obsessed world, and the what, when, who and how of everything else. As Sins Invalid co-director Patty Berne says, solidad is a “Powerhouse of a Performer

TWINCEST is 2 hapa genderqueer multi-media artists, Jez Kuono`ono Lee and Shawn Tamaribuchi, who make performance art based on their relationship. Twincest is intelligent, explicit, and intended for mature audiences. Jez Kuono’ono Lee is a multifaceted genderqueer performance artist and newly acclimated web designer from Hawai`i Nei and the United States. A trained dancer with non-dance influences, Jez’s interests include performance art and butoh, visual art, and unconscious movement patterns, with particular focus on the role and participation or non-participation of the spectator. Shawn is a multimedia artist born in the United States and is the other half of performance art duo twincest. Hir mediums of choice consist of photography/ film/video/ web design with a conceptually preoccupied with the presences of the erotic body in the public sphere.

Yoseñio V. Lewis is a dark skinned Latino of African descent female to male transsexual who has been a social justice activist since he was 13 years old.  A health educator, speaker, writer, performer, trainer, facilitator and spiritual hugger, Yoseñio is a member of the Board of Directors of The Woodhull Freedom Foundation, as well as Unid@s, the National Latino LGBT Human Rights Organization.  He is also a co-founder of Big Boys’ Ink™ Productions, a theatrical writing and performing company.  Yoseñio believes that there can be no art without activism and no activism without art.

Zuleikha Mahmood is a young queer writer of Afghani and Pakistani descent. She currently makes her home in Oakland, and works in the reproductive health field. She has two stories forthcoming in Kohl: An Anthology of Muslim American Women’s Fiction. Her work has also been featured in Muslim WakeUp’s “Sex and the Umma” column. Her zines, “the wombs and the browns”, and “letter forged by the daughter putting on her scarf in a masjid parking lot” have been distributed around the U.S. and in England, Spain, Romania, and the Phillipines.

FOLLOW US!
Dykes on Bikes Border Out 2008
Scroll to top