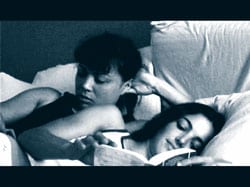 Join us for the third annual Queer Women of Color Film Night, featuring exciting and provocative new films by emerging queer women of color filmmakers. Celebrate art, culture, and resistance by queer women of color and their communities with new films exploring the connections of community and family. What makes these nights “queer” is a quest for representation for all and envisioning a world free of racism, homophobia, sexism and violence. Curated by award-winning filmmaker Madeleine Lim and Darshan E. Campos; presented by QWOCMAP and Qcc.

Refreshments will be served.

SISTERZ OF THE UNDERGROUND: EXTRA CREDIT  (Laurie Koh, 2003)
An all-female hip-hop collective, Sisterz of the Underground, brings the history and culture of hip-hop to the next generation of girls.  LAURIE KOH can frequently be found haunting Mission coffeeshops, playing music in her room, or napping.  She is currently an editorial assistant at Girlfriends Magazine.  This is her first film.

EVERY SURFACE  (Catrina Chaos, 2003)
This film is about the wealth of graffiti art that covers virtually every surface of our streets – rooftops, boxcars at train stations, tunnels, ditches – art that slips by us as we ride the bus and drive our cars to nowhere.  CATRINA CHAOS was born Brown in Manila, Philippines.  She likes puzzles and asking questions.  Her work is informed by hip-hop, punk rock, do-it-yourself and street art.  She is proud of her ethnic culture of revolution.

A JOURNEY HOME  (Mónica Enríquez, 2003)
This poetic film depicts home, community and immigration for three queer Latina women in San Francisco and illustrates the ways in which they heal from and resist these oppressions.  MÓNICA ENRÍQUEZ is a queer Latina originally from Colombia.  She creates social change through art and activism.  She’s active in the anti-war movement and raises consciousness about the struggles in Latin American countries.

WE WILL NOT BE MOVED!: A STORY OF OAKLAND CHINATOWN  (Ching-In Chen, 2003)
Inspired by resistance to the evictions of Pacific Renaisance Plaza tenants in 2003, this poem-film pairs images of everyday life in Oakland Chinatown with lyrical words.  CHING-IN CHEN.  poem sender.  a loudmouth organizer hoping for liberation.  sometimes bridge, sometimes islander dweller. karaoke singer.  budding filmmaker.  keeper of secrets, scraps and misplaced beauty.

AND YOU ARE?  (Orchid Pusey, 2003)
Through the stories of five generations of mothers and daughters, this film explores our names, their relationship to oppression and identity, and how they affect who is preserved in history and who is lost.  ORCHID PUSEY grew up in Beijing, China, and rural Pennsylvania.  She is sustained by her anti-violence and community-building work, her singing, her girlfriend, and her superstar mom and grandmother.  This is her first film.

REMEMBER  (Proshat Shekarloo, 2003)
This film explores the complexity involved in domestic violence as the filmmaker confronts her past abuse by her father.  PROSHAT SHEKARLOO is originally from Iran. She works with women and their communities that have been impacted by domestic violence, HIV/AIDS, substance abuse, sexual assault and hate crimes.

MIXED MESSAGES  (Stephanie Yang, 2003)
An unexpected visit challenges the way a young woman engages with her family.  STEPHANIE YANG is Taiwanese/ European American and often digs into that experience to frame the stories she tells.  She hopes to continue to create positive change through art, passion and her voice.

FREAK  (Leilani Lumen, 2003)
In a (not so) fictionalized U.S., the government rabidly regulates sexual practices.  A young woman fears the consequences of a kinky love affair, breaks it off and checks into a sexual reorientation facility.  LEILANI LUMEN is a web programmer, writer and filmmaker.  Her works have been screened at the Toronto International Gay & Lesbian Film Festival, Ladyfest Out West, CineKink, and Lesbian Looks Film Festival.

JOURNEY OF RICE  (Gloria Ng, 2003)
This hilarious film chronicles three rice sacks vying for the Rice Queen 2003 Rice Bowl.  Basmati, Jasmine and Wild – who will be queen?  GLORIA NG is a healing arts practitioner, instructor, and lifetime student with a bent in the creative arts.

Madeleine Lim is QWOCMAP’s Artistic Director. She conducts our training program and co-curates our exhibition program. She is an Asian lesbian and a long-time community organizer. Lim is an award-winning filmmaker with over 15 years of film and video experience as a producer, director, writer, cinematographer and editor. Her past films couple poignant visuals with contemporary themes: immigrant lesbians of color, survivors of domestic violence and homeless youth. Her films have screened to sold-out theaters at international film festivals and broadcast on PBS stations. For the past three years, Lim has been awarded Artist-in-Residence by the California Arts Council. She was the winner of the 1998 National Educational Media Network Bronze Apple Award and received the 1997 Award of Excellence from the San Jose Film & Video Commission.

Darshan Elena Campos is QWOCMAP’s Screening Co-Curator for our exhibition program. Her previous work includes programming the Santa Cruz Women of Color Film & Video Festival. Her work combines activism with art, education with exhibition. Campos is a founding member of the San Francisco Women of Color Film/Video Network and of the Bay Area chapter of INCITE: Women of Color Against Violence.