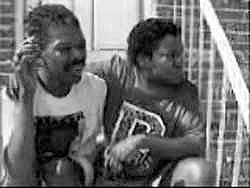 Writer/Producer/Director, Thomas Allen Harris, joins the National Queer Arts Festival this year with a video screening (some full length, some clips) and presentation of some of his finest works.

Writer/Producer/Director, Thomas Allen Harris, joins the National Queer Arts Festival this year with a video screening (some full length, some clips) and presentation of some of his finest works.

Heaven Earth & Hell
Reflecting upon the figure of “Trickster” in African and Native American culture, while recounting the story of his first love, Harris creates a graceful, deeply moving lament for the loss of innocence in a world without magic.
running time: 25:19
1993

Black Body
During the 1992 Los Angeles uprisings, the artist wrapped himself in wire hanger over a period of four days to meditate on the body’s physical and psychic interaction with the legacy of oppression characterizing the experiences of African-American communities in this country. running time: 5:00
1992

Splash
A fable-like tale, Splash explores the interplay between identity, fantasy and desire in pre-adolescence within the narrow construction of masculinity. The tape is an exploration of the artist’s psycho-social and sexual development within a society that encourages the consumption of whiteness and heterosexuality. Unwittingly, the family becomes the agency through which sexual repression and gender conformity are carried out. running time: 7:00
1991

Shot entirely on Super 8mm film, That’s My Face/É Minha Cara follows the spiritual journey of a black filmmaker searching for the mythic face of Africa in the Americas. This magical Odyssey moves between the filmmaker’s boyhood in the Bronx and the legendary city of Salvador Da Bahia, the “African heart and soul of Brazil.” Crossing geographical and temporal boundaries, this evocative and compelling film was shot on three continents over the course of thirty years.
A work-in-progress Duration: 90 minutes

Thomas Allen Harris
AKA
The FireBird

Thomas Allen Harris is an award winning media artist and cultural warrior whose work explores queer desire and African diasporic identity. His performance-based videotapes and films have been featured in festivals and museums including the Berlin International Film Festival, FESPACO-the Pan-African Festival of Television and film in Burkina Faso, the World Wide Video Festival in Holland, Kunsthalle Basel in Switzerland, MIX in Brazil, the Museum of Modern Art in New York and Whitney Museum of American Art’s 1995 Biennial. His mythopoetic documentary feature VINTAGE o Families of Value made its world premiere at the Toronto International Film Festival and has since garnered numerous awards including “Best Documentary” at the Atlanta International Film and Video Festival and a Golden Gate Award at the San Francisco International Film Festival. VINTAGE was broadcast nationally on Free Speech Television in the summer of 1999.

Born in the Bronx and raised in Dar-Es-Salaam, Tanzania, Harris attended Harvard University and graduated with a degree in Biology. He began his career as a broadcast journalist. For over a period of five years Harris worked for WNET/Thirteen producing public affairs shows and documentaries including CRISIS: Who Will Do Science? which aired nationally on PBS in 1988. In 1990 he was twice nominated for Emmy Awards for his work as a staff producer on the public affairs show The Eleventh Hour. His experimental short videotapes-Splash, Black Body and Heaven, Earth & Hell, have been broadcast on public television stations across the country.

Harris is a recipient of numerous awards and grants from such institutions as the National Endowment for the Arts, the Jerome Foundation, the Paul Robeson Fund, the New York State Council for the Arts, the New York Foundation for the Arts, the Pacific Pioneer Fund, the Lannan Foundation and the Black Maria Film & Video Festival. In 1984, Harris received a Henry Shaw year long traveling fellowship for extended study in Holland, France and Italy. In 1992, Harris completed a Helena Rubinstein Fellowship in Critical Studies at the Whitney Museum of American Art’s Independent Study Program. In 1996, Harris was awarded a UCSD Faculty Career Development Grant for research in Brazil.

In 1998 Harris’ commissioned multimedia (DVD and photography installation) ALCHEMY, a meditation on the mysteries of African belief systems in the Americas was exhibited at the Corcoran Gallery of Art in Washington, DC. His second commissioned installation , AFRO (is just a hairstyle): Notes on a Journey Through the African Diaspora , was exhibited in 1999 at the Long Beach Museum of Art. Harris is an Assistant Professor of Media Arts in the Visual Arts Department at the University of California, San Diego. He is currently completing his new feature “That’s My Face/E Minha Cara,” a mythopoetic film that follows the spiritual journey of a black filmmaker searching for the mythic face of Africa in the Americas. Shot entirely on Super 8mm film, “That’s My Face/E Minha Cara,” was filmed in Brazil, the USA and Burkina Faso, West Africa.