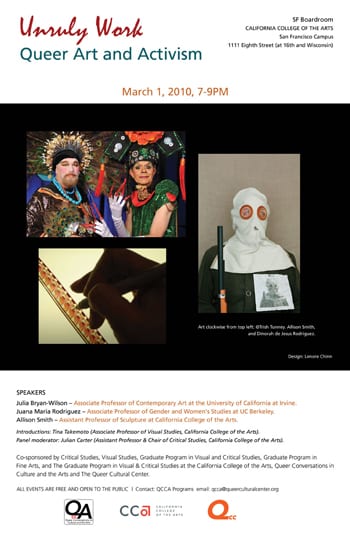 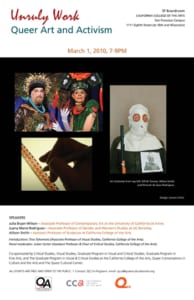 Craft has long been associated with alternative lifestyles, economies, and modes of sociability. This panel considers the unruly aspects of labor practice embodied in craftwork. Panelists will discuss how this work can be subversively reinscribed as art practice and political intervention to challenge histories of colonialism, racism, gender oppression, and exploitation.

Julia Bryan-Wilson’s “Queer Handmaking/Queer Worldmaking” looks at how textile handicraft–including sewing, knitting, braiding, and costume design–from 1970 until today might be understood within a queer rubric.

Allison Smith presents “Needle Work,” a new body of work that emerges from a series of early cloth gas masks photographed in military history museums and found on the Internet.

Juana Maria Rodriguez is Associate Professor of Gender and Women’s Studies at UC Berkeley. She is the author of Queer Latinidad: Identity Practices, Discursive Spaces (NYU 2003) and has published numerous articles related to her research interests in sexuality studies, queer activism in a transnational context, critical race theory, technology and media arts, and Latino and Caribbean studies. She holds a B.A. in Liberal Studies from San Francisco State University, an MA in Comparative Literature from Columbia University and a Ph.D. in Ethnic Studies from UC Berkeley. Before joining the faculty at Berkeley, she was faculty at Bryn Mawr College and UC Davis, where she served as Director of the Cultural Studies Graduate Group. She is currently working on a book manuscript about imagining queer interventions into everyday life.

Julia Bryan-Wilson is Associate Professor of Contemporary Art at the University of California at Irvine. Her research focuses on the intersection of art and politics since the 1960s; she has published on topics such as the visual culture of the nuclear age, the impact of AIDS on contemporary art, and the professionalization of institutional critique. In her 2009 book Art Workers: Radical Practice in the Vietnam War Era, she explores the politicization of artistic labor in the U.S. in the late 1960s and early 1970s, particularly within the Art Workers’ Coalition and the New York Art Strike. Through case studies of Carl Andre, Lucy Lippard, Robert Morris, and Hans Haacke, this book investigates how artists and writers embraced a polemical identification of themselves as workers in relation to the social movements of the New Left.

As a frequent contributor to Artforum, she is especially committed to feminist, queer, and collaborative art, and has written on Sadie Benning, Carrie Moyer, and Sharon Hayes, among others. Her writing has also appeared in Art Bulletin, Art Journal, ArtUS, Bookforum, Cabinet, Camera Obscura, Frieze, Modern Painters, the Journal of Modern Craft, Oxford Art Journal, and Technology & Culture. Her current project examines queer craft and debates about the politics of handmade art since 1970.

Allison Smith is Assistant Professor of Sculpture at California College of the Arts. Smith’s diverse practice investigates the cultural phenomenon of historical reenactment, or living history, using it as a means of addressing the relationship between American history, social activism, craft, and queer identity. Smith uses history as an aesthetic palette to produce performative sculptures and public events that provoke new forms of popular militancy by encouraging participants to “take history into their own hands.” Many of her works play with tradition by transforming commemorative forms of sculpture into monumental children’s toys: hundreds of wooden rifles, life-size costumed porcelain dolls, a hobbyhorse, and a series of donkey pull-toys, for example.

Julian Carter is a queer theorist and historian who chairs the Program in Critical Studies at CCA. He is the author of The Heart of Whiteness: Normal Sexuality and Race in America, 1890-1940 (Duke 2007), and of a number of articles addressing the mass-cultural formation and circulation of norms and normativity. His work on the history of sex education is widely taught, and his original research on the boundaries of modern lesbian identity earned a citation in the Stanford Encyclopedia of Philosophy. Current research seeks to forge connections between trans, dance, and disability studies through an investigation of transition that foregrounds physical movement.