ABOUT FACE: ON THE VALUE OF QUEER SELF-PORTRAITURE
by Richard Meyer

Queer self-portraiture insists on the power of lesbian and gay people to set the terms of their own—which is to say, our own–visibility. This fact carries particular historical and political significance because lesbians and gay men have so often been cast as the object of someone else’s phobic representation. Throughout the twentieth century, we have been framed as outlaws by the police, as sinners by the church, as perverts by the medical establishment, as security threats by the federal government. And yet, even as queers have been subject to the frequently violent force of these associations, we have found ways to resist or exceed such definitions.

One of my favorite examples of such resistance is a photograph by Weegee of a homosexual queen emerging from a paddy wagon in 1940 (fig 1). Far from submitting to the disciplinary force of the police by, say, hiding his face in shame, the queen makes the most of his appearance before the camera–he lifts his skirt high above the knee, smiles broadly, and steps daintily out of the wagon. The queen showcases his own theatrical flair and drag glamour even, and indeed especially, at this moment of his public arrest. Every time I see this picture, I am struck both by this man’s fabulous vamping and by the fact that he is, nevertheless, being led off to a police station to be booked on charges. However charismatic this figure may appear to us now, we should remember that he was treated as a criminal within the context of his day. We should also note that Weegee, a (non-gay) photographer who followed the New York City police on raids and to crime scenes, would never have portrayed this–or any–homosexual queen outside the context of a police arrest.

The examples of Weegee’s 1940 portrait, is helpful, I think, in considering the importance of contemporary gay and lesbian self-representation. Since the Stonewall riots of June 1969, the gay and lesbian movement has frequently stressed the importance of “visibility” within the public sphere–of coming out on our own terms. At its best, the movement has pursued a collective vision of lesbian and gay life in which our social practices and sexual pleasures would be seen as productive rather than pathological, creative rather than criminal, civic rather than sinful. Part of the work of gay liberation, then, has been to redefine the very image of homosexuality within modern culture. Recall, in this context, that one of the most popular gay liberation slogans of the 1970s was “gay is good.”

“Gay is good” is not, however, the central message of this exhibition and that, to my mind, is a sign of the progress we have made as a community. The self-portraits in Face do not, for the most part, offer celebratory, heroic, or even necessarily “good” visions of queer identity. Instead, they attend to the texture and specificity of individual lives, to the fashioning of private experience and personal history in ways which include, but are not exhausted by, the force of same-sex desire.

In three cases (all of which are male), the artists in Face return to an image of themselves as children or young adults (Gary Kong, Arthur Tress, Frank Pietronigro) as if to renegotiate the relationship between the present and the past (fig 2). Self-portraiture here serves as a means to memorialize one’s younger self, to recall the secrets and contradictions that self once carried, and to honor, as Arthur Tress puts it, “the boy I regret not loving.”

In several of the other works in the show, including those by Maxine Kinora,Charles Trapolin, and William Ulrich, techniques of collage and mixed-media are used to convey a complex layering of identity. In Kinora’s case, fragmented black and white photographs of the artist’s body are interposed with fragmented color shots of her in a red dress (fig 3). The work enacts a pictorial dynamic in which the artist is alternately naked and clothed, unified and discontinuous, static and shifting.

Kinora’s self-portrait, and indeed the Face exhibition as a whole, suggests that queer identity is not something which can be contained by any one image or frame of reference. Our sexual desires cannot be separated from the larger patterns of our lives, from our social and domestic circumstances, from our friends and lovers, from our personal histories and politics. What is finally so moving about this exhibition for me is that its eighty lesbian and gay self-portraits, when taken together, demonstrate the true power of the term queer–its commitment to difference as a way of life. 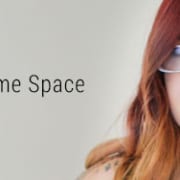 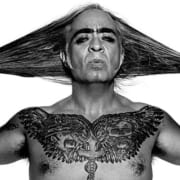 If I Were a Cat

FOLLOW US!
FACE by Jewelle GomezFACE Selections
Scroll to top