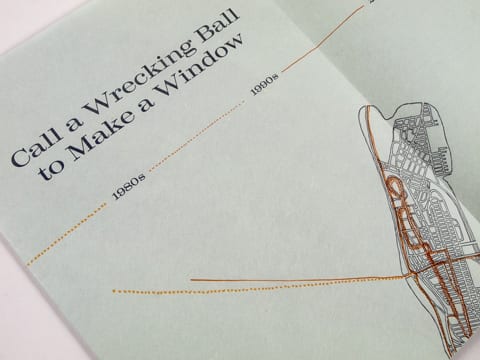 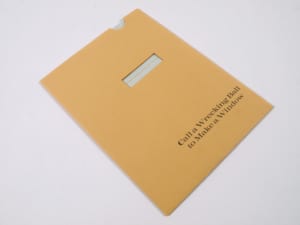 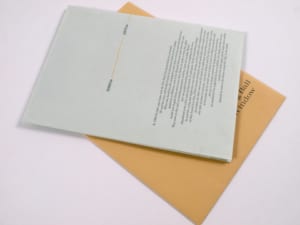 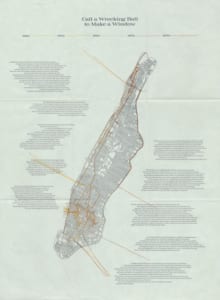 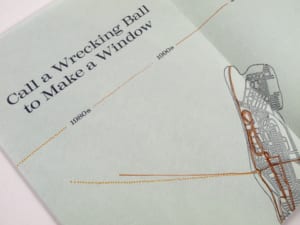 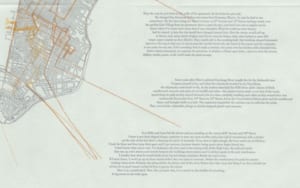 Artist Statement
Call a Wrecking Ball to Make a Window is a map-fold book with original text that
explores routes taken and spaces made by queer people in New York City from the
1970s through the 2000s. Drawing links between the lives of gay men in that period
and my own coming out into the height of the AIDS epidemic in the early 1990s, the
book proposes a fantastic landscape in which these lives overlap through the
geography and infrastructure of the city and the bodies of the characters. By
following the writings of David Wojnarowicz, the queer writer and artist who died of
AIDS in 1992, I trace his moves in and through Manhattan’s grid, attempting to link
back to my own queer trajectories, first as a young lesbian, and now as a trans
person. The book’s title refers to both to the changing built landscape of New York
City from its early colonial history through the contemporary moment, and to effects
produced by the desire to find redemption and instruction through an
oversimplification of personal and political histories.

Manhattan is 13 ½ miles long and 3 miles wide. It is, geographically speaking, a
small and navigable place; despite this, it is a monster of a city. It is a good
landscape for telling impossible stories.

Through mapping the movements of two figures through the space of the city, and
working with broader histories of control, planning, loss, and resilience, this project
seeks to wrestle with the theme of this exhibition: the role of queer bodies in knowing
and making known queer meanings and queer politics, however muddled,
contradictory, and in formation.