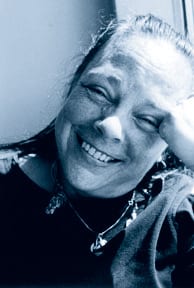 Chrystos was born in 1946 in San Francisco. She is of mixed-blood ancestry and identifies herself as an Urban Indian. Chrystos is a writer, an artist, and an activist. She is the author of Not Vanishing (1988), Dream On (1991), In Her I Am (1933), Fugitive Colors (1995), and Fire Power (1995). Her work has also appeared in several anthologies. With her poetry and activism, Chrystos explores the issues of class, gender, genocide, colonialism, class, and gender, and how these affect women and Indian peoples, especially from a feminist and lesbian perspective. Her personal experiences are also woven throughout her testimonial poetry; her erotic poems are lyrically beautiful and full of unique imagery. Chrystos is the winner of the Audre Lorde International Poetry Competition in 1994 and of the Sappho Award of Distinction from the Astraea National Lesbian Action Foundation in 1995. Join us for this special evening with Chrystos as she reads from various original works.

Jennifer Lisa Vest is a Mixedblood (Black and Indian) poet born and raised in Chicago. Over the years she has been involved in organizing a number of artists collectives including the Berkeley group, Women of Mixed Heritage.(1989) and the D.C. groups Daughters of the Dream (1990) for Black women artists and Divination for Black women writers (1991-92). In 1993 she returned to the Bay Area to form a collective of mixed heritage artists called Four Corners Collective. She has had her poetry published
in two journals, The Fire This Time, and Ache (pronounced ah-shay) and in four anthologies including Testimonies, Fast Talk, High Volume, and Out of Many, One, and Face America. She has performed in poetry readings and mixed media events throughout the Bay Area, Washington DC, New York, Connecticut, Boston, and Atlanta since the early 90s and was a member of the 1997 San Francisco National Slam Team. Her first book of poetry, Names, was published by Indigenous Speak in Berkeley, CA in 1997. She is currently working on a second volume of poetry, Ancestor Count.

FOLLOW US!
Genderbending Gods Other Brothers
Scroll to top