At first glance Bernice Bing’s large, vividly colored gestural canvases seem direct descendants of Abstract Expressionism’s broad, dynamic use of paint and highly charged visual style. Seen in the context of Western art history this reading is entirely appropriate and accurate. Bing attended the California School of Fine Arts (now the San Francisco Art Institute) and the California College of Arts and Crafts (CCAC) during the late fifties, when Ab-Ex maestro Clyfford Still’s dictums still held sway over Bay Area painting; along with Still, Bing lists her influences at the time as deKooning, Kline, and Motherwell and while at CCAC she studied with Richard Diebenkorn. 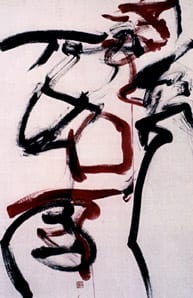 Yet Bing’s work reflects another equally important lineage, one which becomes instantly apparent when viewed in a context outside of European-centered art. The sweeping lines and splashes of paint on canvas and evocative, vigorously executed markmaking speak not only of Abstract Expressionism but of ancient Chinese calligraphy and painting, where “the thought precedes the brush” by an instant, giving light to the intuitive processes of the subconscious mind.

Bing’s work articulates the unspoken heritage found in her training in Abstract Expressionism, where well-regarded Ab-Ex artists such as Jackson Pollock regularly plundered imagery from Native American, African and other “primitive” sources with only passing credit to these rich cultural legacies. From her knowledge as one trained in Chinese calligraphy and painting, Bing recognizes the debt owed by the mid-twentieth-century avant garde. She notes, “Chinese calligraphy has been evolving for six thousand years, whereas in our Western society we are but primitives experiencing a new aesthetic. I am attempting to create a new synthesis with a very old world.”

By focusing on this synthesis Bing, a third-generation American-born Chinese from San Francisco’s Chinatown, creates work which is a complex reflection of her dual heritage. She states, “Art has really been the way I have been able to understand both cultures, and to undo the wrongdoing of both cultures.” In this way Bing draws on both her Chinese background and her American upbringing, “to find what is good within both the cultures,” resulting in work which resonates on several levels. As a Chinese American artist reclaiming the style of Abstract Expressionism and redefining its ties to non-Western philosophies and aesthetics, she brings to light connections which have too long been submerged.