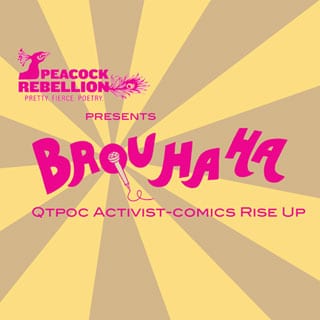 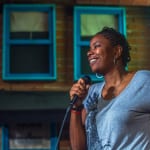 Micia Mosely<,comedian, actress, and educator has been praised by newyorktheatre.com as “smart, timely and also downright hilarious.” This bi-coastal black lesbian and socio-political performer earned her Ph.D. from U.C. Berkeley and has kept audiences laughing in a variety of contexts and venues. Micia wrote and starred her one-woman show, Where My Girls At?, an off-Broadway comedy about Black lesbians (produced by Nursha Project, Directed by Tamilla Woodard). 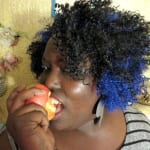 Jezebel Delilah Xis a queer, fat, Black femme performance artist, writer, filmmaker, educator, and Faerie Queen Mermaid Gangsta for the revolution. She is the senior editor for Black Girl Dangerous, co-host of East Bay Open Mic, Culture Fuck, a member of the story telling performance troupe, Griot Noir, an English instructor at several local community colleges, one of the founding members of Deviant Type Press, and on the artistic core of Peacock Rebellion.

She has been published in As/Us Journal, The Womynist, Full of Crow, and Black Girl Dangerous, has written/directed/produced two films that have screened in the Queer Women Of Color Film Festival, performed in a wide variety of Queer and Queer People Of Color theatre projects and cabarets, and been a featured reader at literary events all over the Bay Area.

She uses a combination of performative memoir, theatrical poetry, and feminist storytelling to advance her politix of radical love, socioeconomic justice, anti-racism, community accountability, and liberation. She was recently awarded a fellowship with the Bay Area Writers Project, and holds a MFA Degree in Creative Writing from Mills College where she focused on Young Adult Fiction and Creative Non Fiction. Please read the following articles/interviews that have featured her: http://www.wearyourvoicemag.com/oaklands-inspirational-women/ and http://elixher.com/inspihered-by-vanessa-rochelle-lewis/. 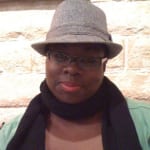 Cassandra Falby is a West Indian American genderqueer femme who is happy to call the Bay Area home. He has done many types of performance and is now trying his hand at comedy. Thoughtful street art, musicals, and fantastic costuming are some of the things she fancies. 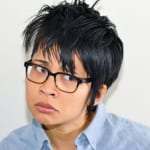 Jaq Victor is the child of a Vietnamese refugee love warrior mother to whom they credit all magical abilities. Such magic includes theatrical clowning, writing a genderqueer fairy tale, creating a solo show about the identity politics of their butt, pursuing a graduate degree in Drama Therapy, and galloping across the Bay Area as a social justice unicorn. 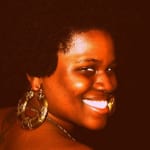 Jasmine Le Blanc is a proud transplant from Inglewood California. She is a student studying Community Mental Health. Besides working in community, she is a hype woman, drag performer, and dancer. She is loud and silly and loves making others laugh without trying. She believes in healing through performing. 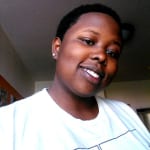 Laurene S. Francois, raised in Brooklyn, is first generation American born to Haitian immigrants and alternates between her first name and family name. Francois enjoys speaking to the intersections of pop or sub-culture styles, fashion and happenings with political queries and strategies for shifting social consciousness. Laurene loves re-reading The Boondocks. 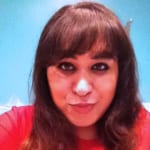 Lexi Adsit, 23, is a graduate of San Francisco State University and native of San Leandro, CA. Fat, femme, and fierce Lexi has grown into a larger-than-life TransLatina inhabiting the bay struggling with love, life, and happiness. She enjoys spending time with her cat and wooing new boos. 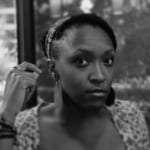 Lisa Evans is a poet, an actress, a lover of bad horror movies/good comics and has major geek swag. She has worked with The California Shakespeare Theater Creative Risk Program, Youth Speaks and Youth Uprising; has represented the Bay Area in National Poetry Slams, and is an ensemble cast member in The Love Balm Project, a theatrical production featuring testimonies of Bay Area mothers who have lost children to violence. 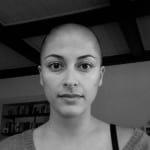 Mahfam Malek is a queer, genderfluid, Iranian-American immigrant who is trying to make sense of the world and their role in it. 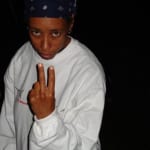 Homegrown Cali native Sis. Nau~T is a lover of life and cultivator of peace and harmony. Inclined to spend time with cool folks doing cool things including but not limited to watching martial arts movies, listening to music, paradigm shifting, and farmers’ market shopping. 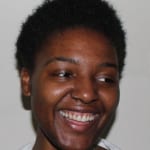 Sabaa Westbrooks is a product of the diaspora who is gender neutral, vegan and a Bay Area native. Sabaa was raised by an undercover black nationalist so undercover that he doesn’t even know it and a super woman that had all the answers. Sabaa loves to cook and eat and loves to love both the tough and soft kind. 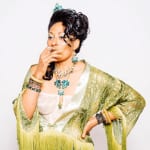