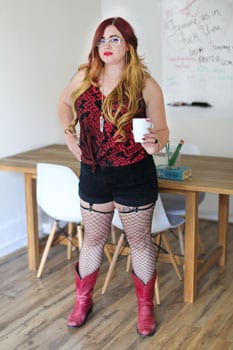 “If you don’t see femmes as queers, it’s because you choose to not see us. You are invested in our erasure. We are here. We have always been here.”  – Dulce aka Fierce Femme, participant

In 2016, we lost femme photographer Amanda Harris. Amanda had produced several events for QCC, most recently the exhibit, Femme Space. In her memory and the memory of the numerous femmes we’ve lost, we re-produce some of the images here. From 10:30am-12:30pm, there will be a discussion with Dulce and other members of the Femme Space Project

Femme Space is a photo project exploring queer femme identity and reclamation of space. Queer femmes of all genders choose locations and co-conspire with photographer, Amanda Arkansassy Harris to reclaim sites of marginalization, erasure and invisibility through portraiture. Femme Space exists to draw attention to the experiences of queer femmes and amplify our stories in art and media.

Amanda Arkansassy Harris was a queer high femme charmer from the South. She was the co-curator of Y’all Come Back: Stories of Queer Southern Migration in the 2015 National Queer Arts Festival, where she exhibited portraits in her EXODUS series and in 2016, she began the Femme Space Project.

Her photographs have been published in Glitter & Grit: Queer Performance from the Heels on Wheels Galaxy, G.R.I.T.S.: An Anthology of Southern Queer Womyn’s Voices, Towards the “Other” America: Anti-Racist Resources for White People Taking Action for Black Lives Matter, as well as various online sources including Al Jazeera America. She believed in the future of the femme oligarchy and the power of portraits to tell stories. 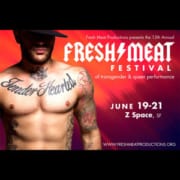 A Salon for Lesbian Photographers