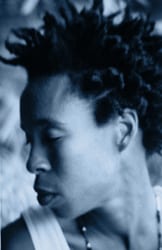 Poet, musician, and actress Hanifah Walidah performs her highly praised multi-character one-woman show. The place is Anyblock, USA. There is Dee, who runs the neighborhood daycare and takes care of all the 9-5 mama’s babies. There’s the Cheatam clan, who runs the Friday fish-fry. There’s Top Pop the elder (nobody knows how old exactly), Cuzin’ Puddin’, a social worker and Top Pop’s favorite manchild. Just down the block is Lynn who sells incense, books, and loves ladies with pretty feet. Across the street is the Church of Love Everlasting with Pastor Ebonise Preeds. And at the end of the block there is The Last Stop, where Ms. Invincible stands on a soap box that reads “Say Yo’ Peace” and speaks to the one who counts the stars. Presented by Brava Theater Center, Hanifah is a recipient of a Qcc Creating Queer Community grant.

Hanifah Walidah is an artist amongst the artists. First introduced as Sha-Key with the 1994 Hip Hop LP release “A Headnadda’s Journey to Adidi-Skizm” she has since, along with reclaiming her birth name (Hanifah Walidah), developed a vocal and performance style that is rooted in the midnight of blues, the backrooms of house, the silent moments of soul and the unshaken will of hip hop. In the early 90’s she laid the foundation for the hip hop poetic revolution in New York with collectives Vibe Khameleons and The Boom Poetic. She signed to Imago records in 1993 to release her debut album” A Headnadda’s Journey to Adidi-Skizm” (Imago) which produced the infectious single “Soulsville”. She continued to perform with the Boom Poetic which was an early platform for groups like the Roots and Rahzel the Godfather of Noyze. She and the Boom Poetic were also featured on the Lollapolooza tour of 1994. In 1995, she toured Europe on the 19 city Vibe Khameleon Trans Euro Tour. Along with music Hanifah Walidah’s theatrical background is just as rich. A long standing member of the WOW Theater collective in NYC she was producer and host of Rivers of Honey, an improv and open theater night for women of color. She was also co-writer and actor of the stage play Bloom (Ain’t I a flower), which had runs at both WOW and the Nuyorican Poets Cafe in 1999. The debut of Hanifah Walidah’s one-woman stage play Straight Black Folks Guide to Gay Black Folks at the Black Box Theater was received with tireless standing ovations and amazing reviews. Hanifah also performed excerpts of the play in the Living Word Festival at Yerba Buena Center for the Arts. She has since been commissioned to perform The Guide at Stanford, UC Berekeley, SF State, Mills, Brava Theater(SF), The Queer Arts Festival (SF) and The NYC Hip Hop Theater Festival. Currently, artistic director of The Crookaletta Ensemble, a theater company based out of Oakland, she produces a monthly theatrical series at the Black Dot. Hanifah is also featured on current music recordings such as the Shame the Devil, War Times, and Adidi (9 years later), a mini opera created over nine years.