Tickets: $12-15 sliding scale, no one turned away for lack of funds 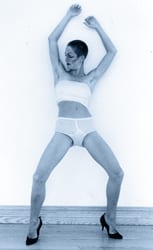 As part of 848’s “More Out than In” series and in celebration of Pride month, 848 presents an evening of dance, spoken word, and music by queer women, curated by Tara Brandel and Jessica Robinson. Performers include Meliza Bañales, Tara Brandel, Jade-blue Eclipse, victoria mcnichol kelly, Copper Wimmin (Friday) and Kristi Martel (Saturday). Followed by a dance party with all-female trip-hop trio Kayatrip.

Meliza Bañales is a spoken-word artist and the author of and I’ve been fighting ever since and Girl with the Glass Throat She has been published in numerous anthologies and magazines including Transfer, Las Girlfriends, and Revolutionary Voices, the latter of which was nominated for a Lambda Book Award in 2001. She’s been called “the girl with the sense of humor of a jackknife.” The first Latina ever to win a Bay Area Grand Slam Championship, she’s been on three national poetry slam teams and has also competed as an individual at the nationals. She is the winner of the Burning Bush Press People Before Profits Poetry Prize 2002. She is an MFA candidate in Creative Writing and a lecturer at San Francisco State University. Originally from Los Angeles, she now lives in Oakland, California.

Tara Brandel is a modern dancer and choreographer who has been making queer work since 1990. Described by Dance Theatre Journal as having a “raw emotional intensity”, Brandel’s new show Love Dances celebrates love in the face of war and fear. She will be performing an extract as part of Dyke Nights at 848 Community Space.

Jade-blue Eclipse, born in Nagasaki, Japan, learned her survival and performance skills in San Francisco’s seedy strip joints, hip night clubs and alternative performance venues. Instead of engaging in violence and drug use she studies Chinese acrobatics at the SF Circus Center with Mr. Lu Yi, a master trainer from the Nanjing Acrobatic Troupe. Specializing in hand balancing and contortion allows Jade to focus her masochistic tendencies into fierce and uncompromising performance.

victoria mcnichol kelly is a poet, singer, visual and performing artist. she was recently seen in The Transit Rider at Dance Mission Theater, and performing her own work at Temescal Arts Center in Oakland. She occasionally leaves poems on answering machines, and is currently trying to fund the production of her one-person show everything’s relative & it all tastes like chicken.

Su Evers has been photographing in the Bay Area for eleven years now, Photographing all things. She was part of the queer arts festival in 2001 at build space, and studies photography at City College in S. F.

Desiree Lymbertos a Lesbian Iranian photographer brings her appreciation of beauty, women, and nature into her work by exploring the intimacy necessary to connect with her subjects in order to capture what is real and natural in the moment.
Catherine Rinaldo is a local clay artist, she finds clay to be a most malleable and forgiving medium that encourages a direct expression of the artist’s subconscious and unconscious rumblings. Her most recent works are inspired by night dreams and explores our seemingly inseparable relationship with suffering.

Three Sheets to the Winds

FOLLOW US!
LIQUID FIREThe Size of Her Rage
Scroll to top