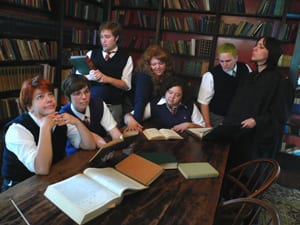 Get ready for a queer, political re-imagining of the Harry Potter© stories! Celebrating the styles of drag musical performance, a diverse cast of many gendered people bring Rowling’s characters to life with their own modern twists. An original version of the production was debuted as part of the SF LGBT Community Center’s Launchpad series last year but for this year’s National Queer Arts Festival we’re coming back longer, louder, more political and even more glittery than before.

Meredith Fenton, Co-Director/Ron Weasley. In addition to being the co-director of Hogwarts Express, Meredith has performed with such groups as Burlesque-Esque, the Transformers and Titland and is the national Program Director at COLAGE. www.colage.org. When not being gay for pay or performing, Meredith enjoys reading, radical organizing, knitting, and cheese not to mention periodically re-reading the entire Harry Potter canon.

Indigo Esmonde, co-director, Harry Potter. Indigo has performed across Canada and the U.S. as Ashton Kutchie (member of the Transformers), Fairy Potter (with Hogwarts Express), and Cinnamon Bunns (burlesque-performer for hire). Now living in Toronto, Canada, Indigo couldn’t pass up the chance to come back and reprise the role of Harry in this expanded, new and improved version of Hogwarts Express.

Kentucky Fried Woman, Hermione Grainger was a member of the Santa Barbara based drag performance group, the Disposable Boy Toys before moving to Seattle and founding the Queen Bees in 2002. In 2005 she said goodbye to the Queen Bees and moved to Oakland where she co-founded ButchBallet, ButchTap & Titland.  She also performs and produces as a solo artist and with other Bay Area gender-based performance artists.

Jolie Harris, Angelina Johnson.  When she’s not fighting for the revolution on stage, Jolie is busy being the founder of Thrive, Social Justice Consulting for Educators and Non-Profits (www.ThriveConsulting.net).  She is a filmmaker and member of the Queer Women of Color Film Festival team.  Jolie is a former member of the Transformers, currently dances with Butch Tap, and performs as a Malcolm Pecs and MuLotta TaTa’s.

Nia Hamilton aka Nefarious Vulvaleen, Lee/Leandria Jordan has been seen as a solo act and as member of Nappy Grooves, Titland and Butch Tap across Bay Area stages and beyond. Nia enjoys strutting her moves on the dance floor, searching for fairies, and spending time with her family.

Harris Kornstein, Neville Longbottom.  A sissy fag with a creative spirit, a love for theory, and an organizer’s passion, Harris is ecstatic to once again be part of the magic of Hogwarts Express!  He also recently made his femme debut as Trannyshack’s favorite figure skater Lil Miss Hot Mess.  When not performing, he works with the Jewish anti-zionist movement, designs websites and more for artists and social justice organizations, and enjoys dancing his ass off.

Mel Corn, Draco Malfoy. Mel is the proud new mother of Julian with her partner Tanner. She first started performing as a member of the Disposable Boy Toys in Santa Barbara and recently just finished a term as the chair of the board of the International Drag King Extravaganza.

Elese Lebsack, Severus Snape. Elese, aka Savory Sweet started performing with the Queen Bees in Seattle, WA before relocating to the Bay Area and joining Hogwarts Express and Titland.

Sarah Hillen, Albus Dumbledore. Hillen is new to the Bay Area drag stage. By day she works with adults with developmental disabilities and by night she has a unique talent for looking like her mother still dresses her.

Keren Tsur, Colin Creevey. Keren, aka Lance ArmStar began performing in high school and was called to do drag with the Citizen Kings. She is currently working with The Sole Collection and various duo acts. Keren’s true passions are good meals, naps and Cranium. All of which she doesn’t get enough of these days.

Darrell Earnest, Pansy Parkinson/ u/s Draco.  Darrell’s first time on stage was in the original production of Hogwarts.  He can usually be found feeding his skiing obsession or re-watching teen movies that feature dance-offs.  In his free time, he’s a PhD student in math education at UC Berkeley.

Dirty D, Luna Lovegood.   Short and in effect.  Causing mischief and spreading
southern queer radical charm.  From the Cuntry Kings of Durham, NC and ButchTap of Oakland, CA, Dirty D thinks it’s sexy when people are conscious of what they put on stage. Let’s get spunky!  Think before you drag.