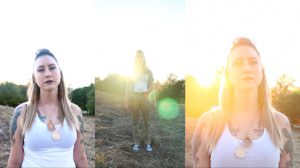 Artist Statemant
Three-­‐channel video. The video installation includes three images of the same figure lip-­‐synching to the same song “Dry And Dusty,” taking turns singing different parts and sometime singing together. At other times some of the channels are dark. It is the same song and of roughly the same duration as the song in sample two. The videos will be displayed on TV monitors and configured on top of podiums at about gallery hang height and about twelve feet from each other facing inward/toward the center of a triangle formation. This configuration is intended to invite viewers to have an embodied experience with the videos as they walk around the monitors and are sung to and implicated in the performance.

My practice as an artist and as an arts and culture scholar revolves around considering the presentation of queer and otherwise representationally marginalized subjects in contemporary visual art and culture. I am particularly interested in portrait photography and video projects that are produced through (to barrow a term from the late José Esteban Muñoz) autoethnographic processes and open up space for considering the ways in which identities are performative and ideologies are inherent in the act of looking. And in a time when bodies are highly regulated in visual culture and when there is a fine line between passing and violence this work seeks to explore the territory of contemporary identity politics. Untitled (Wild Horses) addresses notions of gender expectations as embodied in the performing actor through physical appearance and considers the ways in which voice plays a major roll in gender perception.

The project on an emotional level, is about the subject embodying the voice of Mick Jagger as he reflects the sentiment of the performer at a time wherein their emotions were exemplified by the song Wild Horses. The works submitted here numbered two through five are part of an ongoing project entitled Gangsters Revisited. Where I work in a collaborative process with Libby Paloma and on occasion Renee De Jesus in a project where we explore what it means to be a fair skinned, queer, femme, Latina in California today. Libby is a self-­‐identified femme Mexican and is often mistaken as being white and straight which forces her to repeatedly “come out” to different people every day or to make the choice to be perpetually misread and face the real consequences that all to often come with this visual misrecognition.

Sometimes this misinterpretation of her identity is useful and sometimes it is hurtful. What is compelling to me about Libby’s particular situation is that it is rather emblematic of the history of the ever-­‐changing cultural landscape of California. This ongoing project is a reenactment of Libby and Renee’s gangster pasts and by collapsing their teenage years with their contemporary lives and the landscape of California. Here I hope to engage in the many personal and cultural histories at play. While I believe the element of queerness is embodied in the Gangster photographs through their butchness and their intimacies I believe that with the video work the more recognizable trope of lip-­‐syncing will point toward a more recognizable element of queer embodiment.