LENORE CHINN
BEFORE THE WEDDING 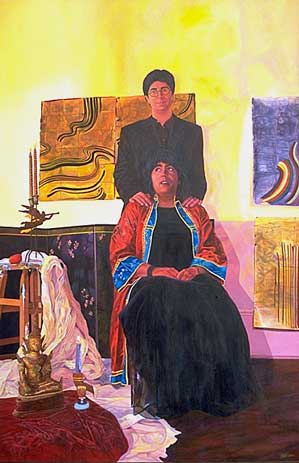 A series of 1999 emails to Moira Roth, accompanied by jpegs, from Chinn chronicling the evolution of “Before the Wedding,” a portrait of Kim Anno and Ellen Meyers.

Sunday, July 11, 1999
“I am sending the image I showed you, a painting commissioned in China of
my paternal great-grandmother, as the first in a series of digital sketches I am gathering to incubate my ideas for a painting of Kim and Ellen. I start with this one because of its Asian aesthetic and iconography and have told Kim I want to lean in this direction,
conceptually. It’s a beginning.”

Friday, August 13, 1999
“This time I focused mainly on the ambience, the sweeping filtered light, artifacts, textures, color, subtleties. Meanwhile, I selected more images and wrote many words to
evoke a mood for my 66″ x 44″ work on canvas.”

“The image attached was taken by a European photographer, M. Miller, around the 1860s, Imperial China. I believe what I am aiming for is the use of relevant cultural artifacts and icons, employing this somewhat ancient Asian aesthetic, re-appropriated and reformatted to my own tastes and signature style.

Saturday, August 14, 1999
“I had that flash to send more late last night and scanned that image out of a wonderful book I’ve got on Imperial China. I also have other smaller black and whites someone gave me, taken of the Empress Dowager and her court. It’s an aspect of my culture which, while I do not favor its brutality, I am intrigued by its decorative ambience. So I have been rummaging through these period pieces for ideas to launch my own and these spark some creative juices. The Dowager’s court photographer, Yu, was very famous for staging all sorts of elaborate sets which documented her activities. I’m sort of employing some of these concepts to document Kim and Ellen, from a lesbian cultural perspective.”

“Kim tells me she has a very old screen, with birds, that might be of interest. While I await her return from New York I’ve been keeping my eye out for any visuals that might be pressed into service, or borrowed. I have asked them to keep in mind artifacts which give a reading about their personal lives and their relationship.”

“I had occasion this week to visit my friend Wylie Wong, a neighbor who lives a few doors down from me. He deals primarily in antique Asian art and I was mesmerized by his collection, which always changes. He had an original piece he inherited which bore a striking resemblance to the kind of painting you saw of my patriarchal great grandmother (replica of course). It was a very large piece with a muted palette and quite exquisite hanging over Wylie’s mantle; one could see this subject was someone of high rank and distinction. The detail was incredible and, while rendered very flat, had a realism to the portrait and spatial illusion that defied the painterly conventions of the time.”

“I told Wylie, ‘Someone must have paid a fortune to have this one commissioned!’ He agreed, and pointed out various decorative patches on the robe which denoted the fellow’s military status as well as other characteristics. His was not an anonymous face.”

“Wylie also showed me the work of that Korean artist from the 1930s, the reason why I had asked if you might have anything to add. Valerie Matsumoto provided a wealth of information that he’ll follow up on. Like our dear friend, Bernice Bing, the artist had died and the family knew little about the value of her estate!”

“He also showed me original black and white contact prints by a Chinese woman photographer, Isabelle May Lee, of the 1920s. Some of her work appeared in With New Eyes at SFSU and was on the front cover of its catalog. She and her husband Leo Chan Lee owned and operated May’s Photo Studio in San Francisco’s Chinatown and were well known for their group portraits and opera singers, some of which were hand tinted with oils.”

Friday, August 27, 1999
“Here’s a first draft of my work in progress, modeled after those old 19th-century poses common in China for paintings and later, photography, but with a Vermeer-like twist. The magic of Photoshop!”

The little Buddha, which appeared at Bernice’s SFAI service, is one of Ellen’s family heirlooms from Thailand; Kim’s wearing her favorite Chinese dress robe with a black gown; her new works on paper hang on her studio wall; there are handcrafted candle holders, lit candles; draped gauze on a funky old wooden stool, and an overly ripe red tomato from Flo’s front yard. You can’t see in this photo æ it’s too dim so, no clarity, no texture, etc. æ but the little platform under the Buddha is a very rich, deep maroon
velvet cloth.”

Saturday, August 28, 1999
“Flo’s [Flo Oy Wong] little red tomato, hidden in the bag of artifacts I’d brought to
Kim’s studio the other night, added a splash of color. The hues are very warm. Kim’s expression and pose, looking upward, is a definite departure from the rigidly formal, traditional format, but that’s what I like about it.”

“We’ll restage this set up in daylight and I’ll reshoot all of the cultural artifacts, the attire, and take lots of closeups. But I believe the essence of my idea is there. More to followº”

Tuesday, September 14, 1999
“Attached are my latest digital blueprints of Kim and Ellen. The charcoal pencil sketch went onto the canvas last week, followed by a watered-down paint sketch over the lines so they wouldn’t blow away. Next comes a wash of approximate colors to define blocks of areas to be painted and refined over the coming months.”

Saturday, September 18, 1999
“Here are a few recent shots of Kim and Ellen in progress. The lighting is a little off because of an overhead halogen but I had to have at least one light for focusing. Any more than that would create a light spot on the canvas and obscure the rendering.”

“After redrawing the charcoal lines with a dilution of burnt umber I go
back and apply color washes to the “cartoon” image.”

“My palette includes the following colors, which I use to mix everything:
Titanium white, cadmium red medium, cadmium yellow medium, cobalt blue,
pthalocyanine blue (turquoise to the lay audience), raw sienna and burnt
umber. The viscosity, transparency and opaque qualities vary depending
on the color I’m using. As a general rule I do not use black paint; I
mix this from the other colors, modulating the warmth and coolness with
red or blue (cobalt).”

“The first wash will create a very exaggerated appearance. It’s simply to define each compositional area. Over the next four to five months I will be applying many layers to create a richness and luminosity that you cannot achieve by simply painting directly from the tube.”

“The skin tones will look very burnt at first because I’ll be using dilutions of red and raw sienna as an undercoating. This creates the warmth in the flesh tones. Blue will be used as an occasional undercoating for shadowing.”

The following quote is taken from a video interview Rudy Lemcke did with Lenore Chinn in her San Francisco apartment on February 1, 2001, part of his QccTv series of interviews with gays for lesbians, for the Queer Cultural Center (QCC) web page (Lemcke is the designer and curator of this page).

“… For the painting of Kim and Ellen, I had actually been toying with the idea that it would be kind of nice to do an image of women. I like the idea of doing an image of two women who had very different personalities, and whose appearance was also very different. They also come from different ethnic cultural backgrounds. Kim is of mixed ethnicity, part Asian, part Native American, and I believe Polish as well. And Ellen comes from a Jewish background. So what I wanted to do was something that incorporated their background and their interests. This is the way I approach all of my paintings of figures, but particularly if I’m doing something that is thematically about a relationship or partnership. I like to see if I can incorporate a variety of these different elements and bring it into a cohesive design. ”
“I actually had been toying with this idea when one day Kim suggested the same idea. It was at a little dinner party that we were all at. Ellen was quite surprised because it was the first time she had heard this novel idea, but decided that it was a good one.”

“We decided to set the stage for this project in Kim Anno’s studio over in Oakland. We talked about things that might be included as design elements, props if you will, that would fit the bill for what we had in mind. And so in a way it was somewhat of a collaborative effort, even though I was staging the things that we decided to use. I said I would like to have Kim’s artwork in the background, and she had some very interesting works on paper which we could include, and I told her that I also recalled seeing a Chinese screen in her studio, and liked the idea of incorporating that somehow. And then the rest were things that we had thrown together as we were going through their home, before we got to the studio.”

“We spontaneously set things up, moved things around, and tried out different things. We had candles which included a couple of metal candlestick holders æ like little winged angels æ and we thought metaphorically they would be really good to include because they stood for their relationship. We had a lot of texture and light. We had had a fan, but it didn’t work very well, because it blew out the candles! So that’s how that painting came to the surface.” (R.L. 2/01) 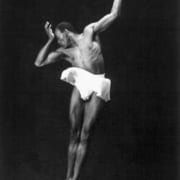 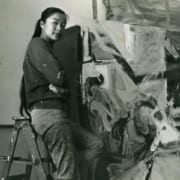