Special guests Karina Dobbins (Five Funny Females Tour) and Morgan (former New Jersey iron worker turned truth telling transgendered funnywoman) round out the night of rowdy laughs. Demonstrating NQAF’s 2011 theme of  “A Sustainable Queer Planet,”  “Marga & The Tomboys” forge their own tools for Queer survival with humor, making Earth the queerest planet in the universe, one joke at a time. 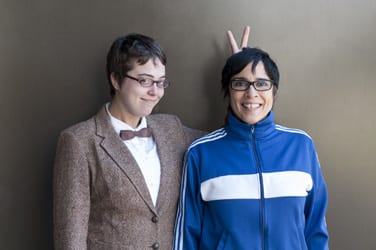 Janine Brito is a sarcastic, snarky smart bomb of comedy funk. She’s been told, on occasion, that she is relentlessly intelligent, cute, and above all screamingly funny. Janine started doing standup comedy in St. Louis and has performed at clubs and theaters throughout the US and Hong Kong. Now a rising star on the San Francisco scene, she is the winner of the 2009 SF Women’s Comedy Competition and recipient of Rooftop Comedy’s 2010 Silver Nail Award. The East Bay Express proclaims that Janine is the first lesbian comic “to really win over a young and extremely jaded hipster audience.” Visit www.janinebrito.com

FOLLOW US!
The Ms. TangTang ShowTransMarch 2011
Scroll to top