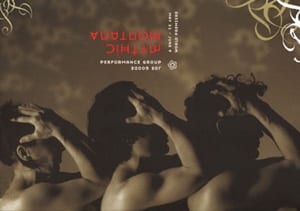 Joe Goode was honored with a New York Dance and Performance Award, a “Bessie,” and a San Francisco Isadora Duncan Award, an “Izzie,” for the 1998 creation and choreography of Deeply There (stories of a neighborhood). He also has been awarded fellowships from the National Endowment for the Arts and the California Arts Council. In 1998, he was awarded one of the first Irvine Fellowships in Dance. Goode teaches at Dancers Group Studio in San Francisco and has guest lectured throughout the U.S. Joe Goode Performance Group was formed in 1986 and has toured throughout the U.S., Canada, Europe, South America, the Middle East, and Africa. In last year’s National Queer Arts Festival Joe Goode Performance Group debuted What the Body Knows.