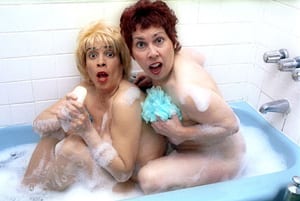 Dueling divas Marga Gomez and Carmelita Tropicana play house in a low-rent thriller about perverted roommates. Single Wet Female drips with suspense while peeking into the intimate living arrangement of an average white chick and the desperate voyeur with back acne who answers her ad. This first-hand account of female passion includes bath scenes, death scenes, and simulated nudity that run through it like a river.

Single Wet Female marks the first professional collaboration between Carmelita Tropicana and Marga Gomez (who are not lovers). Both Ms. Tropicana and Ms. Gomez have dreamt of working together on an important script with positive female role models. Until they find that script, they will do Single Wet Female. After its debut at the 2002 National Queer Arts Festival, the show to New York for an October opening at Performance Space 122.

Carmelita Tropicana, internationally renowned performance artist, won the 1999 Obie award for Sustained Achievement in New York’s downtown theatre scene. She is the author of the Lambda Award nominated book I, Carmelita Tropicana, Performing Between Cultures, which includes her plays Milk of Amnesia, Chicas 2000, and The Conquest of Mexico as Seen Through The Eyes of Hernan Cotez’s Horse (Beacon Press in 2000). Her film I, Carmelita Tropicana, Your Kunst is Your Waffen (directed by Ela Troyano) was awarded Best Short at the Berlin Film Festival and won the Stolichnaya and Audience award at the 18th International San Francisco Lesbian and Gay Film Festival.

Marga Gomez returns to the National Queer Arts Festival after last June’s sold out engagement of Higher Highs/Lower Lows. She tours nationally as a stand-up comic and as the writer/performer of six solo shows. She has been produced Off Broadway at The Public Theatre, The Whitney Museum, and Performance Space 122; and internationally at The Montreal Comedy Festival, The Edinburgh Fringe Festival, London ICA, and Amsterdam’s Triple X festival. Marga is the recipient of Theatre LA’s Ovation Award and was nominated for The 2001 Bay Area Theater Critics Circle Award for her performance in The Twelve Days of Cochina at Theater Rhinoceros. More info: www.margagomez.com

FOLLOW US!
Laurie Toby EdisonTEARS OF ROCK
Scroll to top