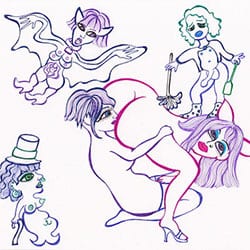 Art Perfect makes Art Pervert is a solo exhibition of Bay Area-based artist Dorian Katz curated by Dorothy R. Santos. Her drawing series 120 Days of Sodomy appropriates the Marquis de Sade’s book title 120 Days of Sodom. While Katz’s non-human beings don recognizable human characteristics, they are playful, whimsical, and sometimes political hybrids and chimeras. The artist imagines a sex utopia that ponders what it would be like if humans were socialized like other species such as the bonobo monkey. The non-tentative, bold line work mirrors the way her creatures live and exist in the world. It’s as if the lines from Hans Bellmer crossed paths with Robert Crumb’s and made lush new creatures far more telling of human sex and sexuality than their originators. The artist long standing alter ego Poppers the Pony makes fantastical visits into parts of the series. The drawings push against gender constructs and binary structures. Each piece works towards understanding gender non-conforming beings through vibrant characters engaging in extreme sex acts, uninhibited gender liberation, and sexual freedom. 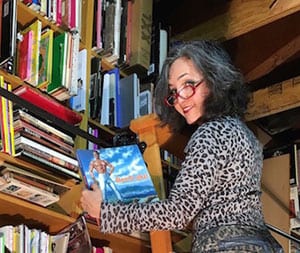 Dorian Katz is a visual artist and curator living in Oakland, California. She places herself with the hybridic creatures populating her drawings into historical retellings, a blurring of scientific data on animals, art history and invented narratives. Katz received an MFA from Stanford University in 2011. Her art has been exhibited in many venues such as SOMArts, Lawton Gallery at University of Wisconsin-Green Bay, Worth-Ryder Gallery at UC Berkeley, the Museum of Death in Hollywood and Gallery 848. Her art is in numerous publications including ALMANAC: An Index of Current Work and Thought, Salome in Modernity (University of Michigan), Other magazine, Morbid Curiosity, The Human Pony, Hyena (Reaktion) and Alphabet (Stacked Deck). 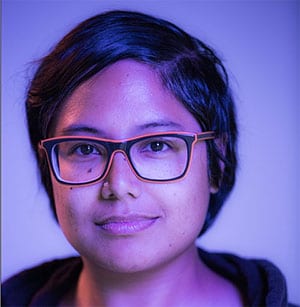 Dorothy R. Santos is a Filipina-American writer, editor, curator, and educator. Born and raised in San Francisco, California, she holds Bachelor’s degrees in Philosophy and Psychology from the University of San Francisco, and received her Master’s degree in Visual and Critical Studies at the California College of the Arts. Her work appears in art21, Art Practical, Daily Serving, Rhizome, Hyperallergic, and SF MOMA’s Open Space. She has lectured at the De Young museum, Stanford University, School of Visual Arts, and more. Her essay “Materiality to Machines: Manufacturing the Organic and Hypotheses for Future Imaginings,” was published in The Routledge Companion to Biology in Art and Architecture (2016). 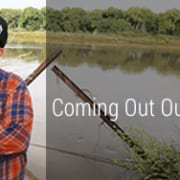 Dyke Codes: Coming Out Outside the Bubble