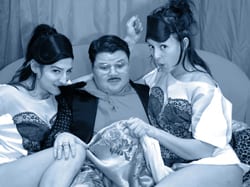 FROM NEW YORK! New York nightlife icon Murray Hill hosts this jaw dropping three person variety show with a few cheesy songs, plenty of audience participation, and his irrepressible shtick, while the world-renowned Wau-Wau Sisters perform death-defying trapeze routines in skimpy outfits, rock their electric guitars, and dress as Catholic school girls for an acrobatic floor routine-slash-striptease. It’s also the story of how Murray came to meet the Sisters, including Murray gate-crashing their show and falling head over spiel for the Sisters when he discovered their talent for mixing martinis and smoking Pall Malls while in handstands. After a late night of boozing and carousing, these three reigning New York alternative acts, decided it was their calling to do a show together and spread their brand of unique entertainment to the nice people of San Francisco for the premiere of “Three Sheets to the Wind.”

Murray Hill, “the hardest-working middle-aged man in show business,” is perhaps the world’s best-loved drag king entertainer and funmeister extraordinaire. He has been delighting audiences with his irrepressible brand of slapstick antics, rampant mugging, outrageous zingers, out-of-tune crooning, zany pratfalls, and inspired send-ups of Ralph Cramden to Benny Hill (no relation). Hill was recently honored in OUT magazine’s OUT 100 list for performance, and “Best in New York” by New York Magazine, and Village Voice. As a presenter and emcee, Murray is without peer. Casting a gimlet eye on the audience through his trademark tinted aviator glasses and squished into one of his vintage polyester 52-portly polyester suits, Murray can hurl a good-natured zinger and schmooze the dames with the best of them. He was honored to emcee a portion of Wigstock with Lady Bunny, two sold-out LeTigre shows at The Bowery Ballroom, and the mainstage at Village Voice’s Siren Music Festival in Coney Island. Recently hailed as _the most successful drag king_ by The New York Post, Murray has been featured in books, TV, independent film, video, and reported on in leading mass market and entertainment newspapers and magazines all over the globe. He has been seen Off-Off-Broadway in Varla Jean Merman is The Bad Seedling, Caged! at Town Hall, and Caution! Curves Ahead! with the Glamazons. He produced, wrote, and starred in the three sold-out runs of A Murray Little Christmas, The Murray Hill Star-Spangled Christmas Comedy Special and Caught in the Act at Fez, New York’s premiere downtown cabaret venue. He writes a column for the NY BLADE, performs stand-up at Joe’s Pub, Caroline’s, Comedy Garden, and Gotham Comedy Club, and his short film Call Me Crazy is screening in festivals all over the United States. He is currently working on a new TV show, and booking a tour.

the Wau-Wau Sisters make mischief and mayhem everywhere they go. These two siblings share many memories of an early childhood in traveling shows and circuses. Since their arrival in the Big Apple, the Wau-Wau Sisters have been seen shimmying up a trapeze, crooning original ditties out of key and disrobing to some of this century’s best and worst music! Big on talent and tan lines, it is said that they can mix martinis in a handstand, while smoking Pall Malls and thinking impure thoughts! They have most recently toured with post-punk electro band Le Tigre, and been seen in NYC at The Fez, Warsaw, the Mercury Lounge, CBGB’s, the Hammerstein Ballroom and Joe’s Pub. They’ve had feature articles in The Village Voice, Time Out New York, and have been written up in The New York Times, The New York Post, and Jane Magazine, among many others. Other media exploits include Nipon TV’s Good Morning Japan, the Isaac Mizrahi Show w/ Rosie Perez and NPR’s The Next Big Thing. They just came back from Tease-o-Rama 2002 in San Francisco and opened for the incredible cabaret drag duo, Kiki and Herb, at The Knitting Factory, in NYC and the feminist band Le Tigre. Always on the run and dogged by a trail of incriminating Polaroid’s, they take solace in their imagined celebrity, arriving in their pink Buick, matching disguises, and gin-soaked smiles, claiming to feats unmatched and unimaginable acts at every turn. There’s no trick these sisters can’t turn for the right price.