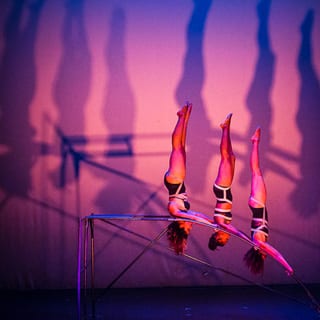 Spin your world upside-down with Topsy-Turvy Queer Circus! This one-of-a-kind event is back for a second year of mesmerizing performances that showcase awe-inspiring circus artists from across the country. Hosted by Honey Mahogany from RuPaul’s Drag Race fame, Topsy-Turvy dazzles, delights, and defies expectations with this year’s show Visions. Are. Legendary.

Topsy-Turvy’s geographically and culturally diverse cast of queer, trans*, and gender-variant circus performers use their bodies to tell unique stories that subvert traditional ideals of beauty, sexuality, and power. Building upon the Bay Area’s rich history of dance, burlesque, drag, and performance arts, Topsy-Turvy provides financially accessible, physically inspiring theater that pushes the boundaries of contemporary circus artistic expression. The event became a sell-out success as the first all-queer circus show in San Francisco and is excited to return as part of the 2014 National Queer Arts Festival. 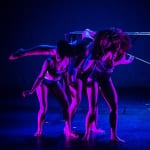 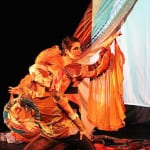 The Dandy Vagabonds are a Baltimore-based pair of curious, playful artists who thrive on telling stories of whimsy, adventure, insight, and balance through performance art, circus arts, film, fiber arts, the tactile, and the ephemeral. www.facebook.com/dandy.vagabonds‎ 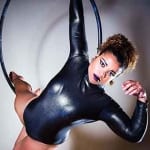 India Davis is a Multidisciplinary Artist and instructor. A trained acrobat and aerialist,
‪India combines physical feats with dance to illustrate the breadth of her inspirations. Also skilled in moving image and theater practices, Davis has been a solo and collaborative creator of a variety of productions that integrate installation, performance and moving image.  ‪ Her work has been seen across the country and is always guided by themes of multi-dimensionality, spirit, and the link between legacy, timelessness and future manifestation through the body.  India is a co-founder and member of Body Waves, a Queer Black dance acrobatics collective based in Oakland, CA.  ‪ She is honored to return as the co-organizer of Topsy Turvy: A Queer Circus Extravaganza VISIONS. ARE. LEGENDARY. You can find her at www.rubydiamondarts.com. 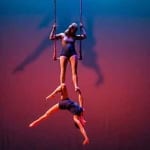 Megan Gendell has performed circus professionally in NYC and around the U.S. since 2007, working with companies including LAVA and STRONGERCircus. She is a 2012 graduate of New England Center for Circus Art’s Professional-Track Training Program. As a soloist she specializes in handbalancing, static trapeze, and aerial rectangle; she also performs duo trapeze with her partner Lauren Feldman. Lauren began her circus training in Brooklyn with LAVA, and is currently in the Professional-Track program at NECCA. She is also a playwright whose work has been seen throughout the U.S. and internationally. She has been nominated for the Stavis Playwright Award, the Wendy Wasserstein Prize, and the Steinberg New Play Award, among others. She frequently collaborates with ensembles as a writer or dramaturg and holds an MFA from the Yale School of Drama. Lauren is passionate about looking at circus through a theatrical lens, and finding all the possibilities that then arise. 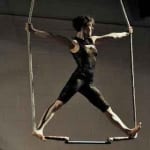 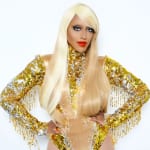 Honey Mahogany is an international drag performer and budding recording artist. The currently reigning Miss Blow Up USA initially gained worldwide fame as a cast member on season five of the reality television show and cult phenomenon, RuPaul’s Drag Race. Honey hosts her own weekly drag show in The Castro called Mahogany Mondays at the Midnight Sun and has also appeared in numerous theatrical productions including Dirty Little Showtunes, Halloween: The Ballad of Michelle Meyers, Oprah: The Dragsical, and  several Peaches Christ Productions. In 2011 she was voted Best Drag Queen in the SF Weekly’s Readers’ Poll and selected for the SF Bay Guardian’s Hot Pink List of Queers to Watch in the Guardian’s Queer Issue. Honey Mahogany continues to grow as a performing artist and appreciates her ever-growing community of fans and followers. Honey’s music and videos can be found iTunes, amazon, and YouTube. See more of this fabulous queen bee at www.itshoney.com. 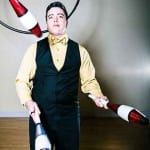 Indi McCasey believes in the transformative power of circus arts and is an experiential educator, circus performer, non-profit program administrator, and event producer. As an artistic member of Wise Fool New Mexico, a social justice circus and theater company, Indi taught circus classes, co-directed the youth summer camp, and performed in the annual Circus Luminous show at the historic Lensic Theater. They have performed at queer cultural events in Albuquerque, Boston, Chicago, Oakland, Portland, Seattle, Tucson, and Vancouver since 2003 and are a founding member of the Santa Fe Gender Offenders, infusing queer culture into circus arts through multi-media performances. www.indimccasey.com 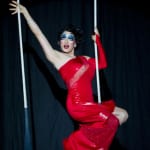 Emily G. Park, is a multi-disciplinary artist whose decades-long involvement in devised theatre spans the spectrum of roles from creator, collaborator, choreographer, director, designer, maker, to performer and producer. For three years, she was a featured artiste and commissioned costume, mask, and props designer/maker with Giffords Circus (UK) and was part of their team that won the 2003 Jerwood Circus Award for the narrative multi-act, aerial-clown-equestrian act Living Dolls. Emily’s specialty acts as aerial chanteuse M.Lee have been showcased in the USA, UK, and Ireland. In the Bay Area she has collaborated with and/or performed for Antenna Theater, Dark Garden, Earth Circus, Eat Cake Productions, Epiphany Sonic Dance Theater, Eye Zen Art, Flynn Creek Circus, Jessica Ferris Performance, and is known for her own visionary and legendary performance in Topsy-Turvy as part of the 2013 National Queer Arts Festival. 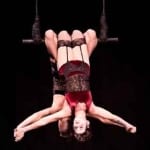 PERVERTtheCIRQUE is a queer and trans* adult circus founded in 2012 by Jack StockLynn and Amari Fauna in Portland, Oregon. Jack is an Aerialist, Clown and Acrobat and is also a current company member of DoJump! Amari is a Clowning, Stiltwalking Farmer. Together they wanted to create a circus that would increase queer and trans* visibility on the stage, celebrate their fabulous selves, raise money for trans* related health care expenses, and have fun doing it. So far so good! Find them online at pervertthecirque.com.

The Art of Jerome Caja