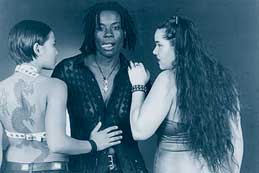 Liquid Fire returns for its fifth anniversary performance—a selection of their “Greatest Hits”.

Liquid Fire 2001: Nasty marks the five-year anniversary of Liquid Fire, the annual multidisciplinary workshop and performance project dedicated to the exploration, reclamation, and celebration of the erotic power of lesbians of color. This year’s production will bring together artists from the last four years as they unleash “burning hot” spoken word, music, and song and dance performances that are sure to make your knees weak, your toes curl, and your mouths water. You do not want to miss these women in two separate orgasmic performance programs featuring “the best of Liquid Fire” and some unforgettable new surprises. Returning once again to drive the burning pulse of the show with their powerful rhythms is the multicultural lesbian percussion group Librations. 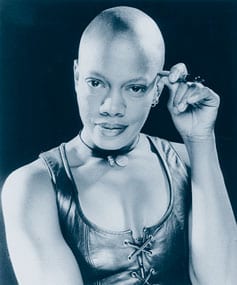 Director Veronica C. Combs began Liquid Fire because, “The erotic is not only about sensual pleasure. It is also about the energy inside us that helps us to heal ourselves and others while motivating us along our life’s path. Historically women of color have been oppressed and stigmatized in our sexuality. We have been made to feel ashamed of our eroticism instead of honoring, celebrating, and claiming it as our true sensual essence.” Her goal is to spread the message: “As lesbians of color, it is okay, safe, and powerful to feel pleasure” to as many lesbian-of-color communities as possible. The cast includes Adella, Michelle Bolong, Lynn Bolton, Skyler Cooper, Kebo Drew, Pam Dunn, Rebeca Sanchez Glazer, Rhonda James, Dalila Jasmin, Ondrietta Johnson, Shari McKoy, Crisol Negron, Yolanda Noriega, Celeste Pearl, Aviance Rhome, Lolan Sevilla, and more. Also featuring the multicultural lesbian percussion group Librations with Yolanda Vierra Allen, Claudia Vierra Allen, Roz McMillan, and others. Liquid Fire is supported by the San Francisco Arts Commission’s Cultural Equity Grants Program, Serpent Source Foundation for Women Artists, Queer Cultural Center, and Rainbow Grocery: A Worker-Owned Cooperative.

VERONICA C. COMBS
Veronica C. Combs, the mastermind behind Liquid Fire, has been producing groundbreaking lesbian performance programming in the Bay Area for the last six years. An accomplished producer, director, dancer, and choreographer, she was the artistic director of Luna Sea Women’s Performance Project in San Francisco from 1995 to 1998. While at Luna Sea, Veronica produced and directed a multitude of powerful shows, including Skin: the Black and White of It, a project that explored racism between African American and White lesbians. She also produced and directed the wildly popular Women of Color Month Performance Festival (September 1996 & 1997), featuring Juke Joint, Sistahs Singin,’ and Liquid Fire.

LIQUID FIRE:
In 1997, Liquid Fire started out as a sold-out weekend show at San Francisco’s Luna Sea Women’s Performance Project, featuring only African American lesbians. Based on the success of the 1997 run, the show was staged at Luna Sea again in 1998. Due to overwhelming audience response, and a personal desire to promote healing and empowerment for all lesbians of color, Veronica expanded the project to include a workshop process. She also invited the participation of Asian and Latina lesbians, ages 21-70+. Liquid Fire 1999 was also staged at Luna Sea. Liquid Fire 2000: Unleash The Fire was performed at SomArts Theatre as part of the Queer Cultural Center’s National Queer Arts Festival. Liquid Fire’s 2001 production of Nasty will once again be a highlighted event at the Queer Cultural Center’s National Queer Arts Festival 2001. There will be ten performances over the course of three weekends.

Title: Something About You
Artist: Crisol Negron
Type of piece: Live guitar and song/text, some spanish