The performance power couple Stanya Kahn and Harriet Dodge come home to San Francisco with new solo work and also to present their FIRST-TIME theatrical collaboration. Stanya will perform excerpts from her recent, acclaimed solo show The Ballad of Crappy and Seapole (According to Shempco). Harriet “Harry” Dodge will perform excerpts from her wildly successful but rarely seen solo performance From Where I’m Sitting (I can only reach your ass). Together, Kahn and Dodge will perform excerpts of a new work in progress, a two-person performance piece they are co-creating, tentatively titled: Naked On the Path. The main characters are Eddie and Betty Sweaty. Eddie is tightly wound, a farmer and a lover, and a little anguished in the world at large. Betty is tall and earnest, a little slow in her speech but quick witted, sexually voracious in an understated way, and smoothing out the edges of slow-burning anxiety. 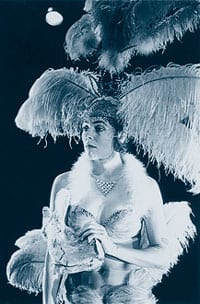 High-strung, verbose and intensely physical, this is a multi-media tragic-comedy, a sort of fast paced Waiting for Godot performed by one person. It also stars a complete Vegas showgirl outfit not to be missed.

The Ballad of Crappy and Seapole is a show within a show about work, money, grief, anxiety, and exuberance. Shempco, a nearsighted, unemployed, insomniac loner choreographs all night long making a play about Crappy and Seapole, two visionary nobodies who alleviate distress with odd and haunting rituals. Manic and hopeful, Shempco interrupts his enthusiastic physical theater to engage Jürgen, the political philosopher, sharing florid anecdotes on everything from the marginalization of the Vegas showgirl to the death of ideology, unemployment and the marketing of Ché Guevara t-shirts. Both reckless and vigilant, Shempco’s snappy critiques and lucid chatter merge with the literary and visually rich emotional adventures of Crappy and Seapole to put a new spin on social commentary aimed at issues of consumerism, class, coping, and isolation. 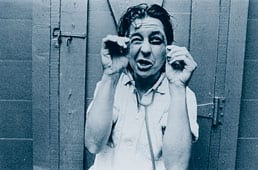 A multi-faceted treatise on language and iconoclastic gender portraiture, From Where I’m Sitting is an investigation of cowardice, courage, faithlessness, and pretending. Through poetic and visceral monologues by multiple characters casting stark images-a sailor, a boxer, a guy in a dog suit-this is a piece that deals intrinsically with the near-psychosis of the gender dysphoric he/she.

Stanya Kahn
Stanya Kahn is an interdisciplinary performer, writer, dancer, and actor originally from San Francisco and now living in New York City. She has been making performance since 1987 and her solo and collaborative works have toured nationally and internationally. She was a founding member of the performance group CORE (1994-1999) and has collaborated with Ishmael Houston-Jones, Keith Hennessy, CONTRABAND, Lauren Elder, the writing trio S.A.M., Headlong Dancetheater, and Harriet “Harry” Dodge.

Stanya has created four critically-acclaimed solo shows, the most recent of which, The Ballad of Crappy and Seapole (According Shempco), premiered at P.S. 122 in New York in December 2000 and will tour to San Francisco, Zurich, and Dallas this year. The first was Utility Beast (1995), which played at a dozen Bay Area venues. In 1995 Stanya was nominated for an “Izzie” (Isadora Duncan Dance Award). In 1997 she won a Bay Area Award Show award and ran her second show Delirium, which premiered at New Langton Arts in San Francisco, and then toured with the show in several cities.

Harriet Dodge
Harriet Dodge is a performer, director, writer, and visual artist whose work has shown in theaters and galleries across the country. Dodge has been working since 1992 evolving her trademark style of theater, which combines colloquial narrative with post-modern conceptual performance and music. She appears in numerous independent film and video projects, including John Waters’ latest feature Cecil B. Demented, and in her own film, By Hook or By Crook, which she wrote and directed with Silas Flipper (of the infamous punk band Tribe 8) and stars in with Flipper and Stanya Kahn.

From 1992 to 1998, she was the art director and co-owner of the nationally renowned, award-winning coffeehouse/cabaret, The Bearded Lady. Premiering her own performance work there and at other popular Bay Area venues, Dodge has since brought her work to many Bay Area and New York City venues. Most recently she collaborated in the making of critically-acclaimed SCRATCH, a dance-theater collaboration, with aerialists Miranda Mellis, Allessandra Ogren and accomplished Canadian choreographer Shannon McGuire.