White Lies brings humor and hope to conversations about race and racism in the United States through music, dance, film and theater blended together in a multimedia performance that will leave you inspired to think, learn, discuss, and act. Join us for a journey that is both deeply political and deeply personal to explore cultural complexities and dismantle racism in our queer communities. 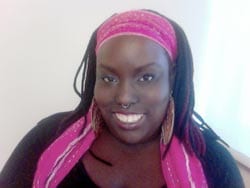 Jezebel Delilah X is a queer, fat, Black femme performance artist, writer, faerie-princess-mermaid, and teacher. She is co-host of East Bay Open Mic, Culture Fuck, a member of the story telling performance troupe, Griot Noir, and one of the founding members of Deviant Type Press. She has been published in The Womynist and Full of Crow, is a featured writer for BlackGirlDangerous, has written/directed/produced two films that have screened in the Queer Women Of Color Film Festival, and has been a featured reader/performer at events all over the San Francisco Bay Area. She uses a combination of performative memoir, theatrical poetry, and feminist storytelling to advance her politix of radical love, socioeconomic justice, anti-racism, and community empowerment. She holds a Masters Degree in Creative Writing from Mills College where she focused on Young Adult Fiction and Creative Non Fiction. Here is a recent interview with her: http://elixher.com/inspihered-by-vanessa-rochelle-lewis/ 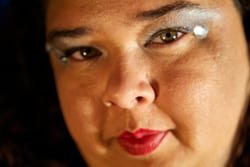 Jolie D. Harris is a former member of the Transformers and Hogwarts Express and a current member of ButchTap, the Hot Totties, and Cheek to Cheek.  They are deeply invested in the power of performance as an embodied community healing practice.  When they aren’t on stage, Jolie serves as the Executive Director of Thrive Social Justice, an organization that supports educators and non-profits in their movement toward collective liberation (www.thrivesocialjustice.com). Photo: Johanna Breiding 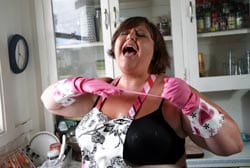 Kentucky Fried Woman (KFW) is an Oakland, CA based social justice activist, community organizer, performance artist and cabaret producer who is passionate about using her white skin privilege towards eradicating white supremacy. KFW is the co-founder of several queer performance collectives including three Oakland based queer dance troupes, ButchBallet, ButchTap, and Titland and has been spotted on San Francisco stages in productions like Hogwarts Express: The Musical, where she played the role of Hermoine Granger.  She currently performs with the fat-positive troupe CHUBB and is co-editor of a forthcoming anthology about female drag queen performers.  Smith has produced over 100 queer cabaret events including the 10th annual International DragKing Community Extravaganza Brunch, the 2008 National Queer Arts Festival Production of Rally the Troupes; the 2010 National Queer Arts Festival Production of Flabulous, and a monthly queer cabaret in Oakland. Her essay, “Fat, Femme, Fierce: Kentucky Fried,” can be found in the book, Femmes of Power: Exploding Queer Femininites which features the photography of Del LaGrace Volcano.  She is also featured in Queering the Popular Pitch and the documentary Love Letter. When not on the stage or busy plotting revolutionary actions, Smith can be found in her kitchen happily bringing Southern Living recipes to life or watching Oscar winning movies.  She is available to speak at, produce, perform and emcee events and also teaches classes and facilitates workshops on a variety of subjects related to leadership, bodies, race, cultural appropriation and identity.  You can learn more about what she is up to on and off the stage at: https://www.facebook.com/KyFriedWoman. Photo: Shilo McCabe 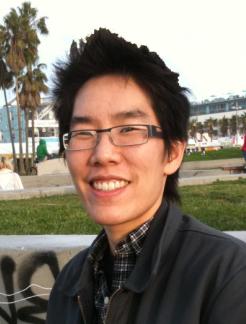 Mel Y. Chen has a super short public performance history (a movement-speaking art piece directed by Jim Saliba, Jesus and the Myth of Care, in 2002) and a long history of thinking, feeling, and writing about the relationships among race, class, sexuality, body, and place in the arts and in everyday thinking and practice. Mel’s short film, “Local Grown Corn,” about race and migration as seen through the lens of friendship and illness, was made under the auspices of the Queer Women of Color Media Arts Project, and he has been writing music for more than 20 years. Mel is also on the Advisory Board of Thrive Social Justice in Oakland, and participates in a beautiful queer of color arts group where she is currently working on a music project with Jolie Harris. Mel’s academic work brings together critical race, disability and queer theory, environmental and critical animal studies, and language, all of which can be found in his 2012 book, Animacies: Biopolitics, Racial Mattering, and Queer Affect. Mel has further written on topics such as animal gendering in film, protest cultures and ableism, the racialization of pollution, and the intimacies that live under toxicity. Photo: : Julia Bryan-Wilson 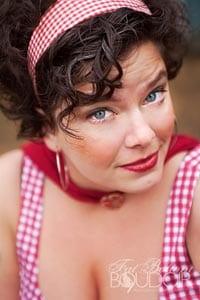 Meredith Fenton, who also performs under the stage names Starr 69 and Corky St. Flair, has been strutting her stuff on Bay Area stages for over a decade. She passionately believes in the power of queer performance to elevate social justice themes and promote collective liberation. One of her proudest creations was Hogwarts Express: The Musical! a full-length drag musical that queered the Harry Potter stories. As a drag and burlesque performer, she has danced with popular Bay Area troupes including The Transformers, Burlesque-Esque, Titland, and Sparkle Motion as well as created solo pieces. Meredith was been a producer, choreographer and performer of Rally the Troupes- a social justice focused drag production produced in 6 National Queer Arts Festivals and once at Mills College.

Outside of dancing, Meredith is the co-editor of Let’s Get this Straight, Seal Press, 2010 and was the founding editor of Ella’s Voice blog. She was the longtime co-emcee of the Kentucky Fried Woman show. By day, she helps social change organizations leverage media and communications. By night she is an avid reader, Muppet fan, foodie, aspiring gardener and Boggle champion. Photo: Fat Bottom Boudoir 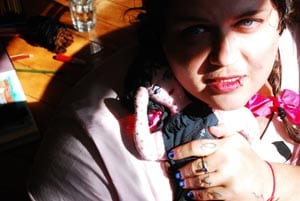 nomy lamm is a writer, performer and voice teacher whose work focuses on trauma and transformation, body liberation, disability and desire.  She was recently selected as a recipient of the San Francisco Arts Commission’s Individual Artists’ literary grant to complete her experimental novel, 515 Clues, which connects a series of non-linear narratives over threads of time and space, linking a trans klezmer musician in Eastern Europe to a teenage goth girl in the midwest, to children in a Shriners hospital growing wings to escape their fates, to a fat queer character on disability benefits living “here in Socialist America.”  Her fiction, poetry and essays have been published in anthologies including Fist of the Spider Woman: Tales of Fear and Queer Desire (ed. Amber Dawn, Arsenal Pulp Press, 2009), Word Warriors: 35 Women Leaders in the Spoken Word Revolution (ed. Alix Olsen, Seal Press, 2007), and the groundbreaking 90’s feminist anthology Listen Up: Voices From the Next Feminist Generation (ed. Barb Findlen, Seal Press, 1995).  She recently had a two week residency at Hypatia-in-the-Woods with Erin Daly to write songs and incubate material for ((double hug)), a portable ritual platform for decolonizing bodies through music.  She writes an advice column for Make/Shift magazine, and performs regularly with Sins Invalid, a bay area performance project that centers the work of queers and people of color with disabilities.  She recently played Pansy, a giant gay fat dandy looking for love on the internet, in DavEnd’s “Fabulous Artistic Guys Get Overtly Traumatized Sometimes: The Musical!”, and played a lunch lady in the video for “Delicate Cycle,” by Kimya Dawson and Aesop Rock’s new project, The Uncluded.  Her mission, whether it be on a stage, on the page, over the soundwaves, or sitting in a room together, is to free up the authentic voice inside all of us and make way for collective liberation. Photo: Caldwell Linker 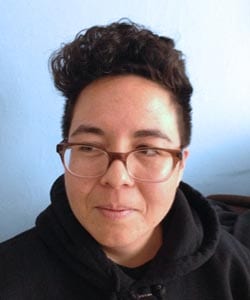 Open Mike loves every moment when we create connections between those things that cultures of dominance have tried to convince us are differences.  Open Mike is happy to be here with you. Photo: Meredith Fenton 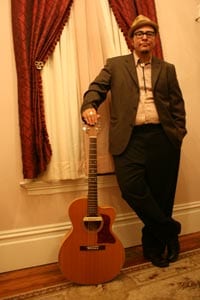 There are plenty of male folk-twang Americana singer songwriters who sing about love, oppression, assimilation, and growing up an outcast in the U.S., but not many of them can say they learned to write songs at Girl Scout camp.

StormMiguel Florez is a MexicanAmaricón (pronounced: Ah mah ree cone) singer/songwriter, performer, and producer who was born and raised as a girl in Albuquerque, New Mexico. More importantly, he was a kid who loved to sing. As a child, StormMiguel stood on furniture and performed for his family, by singing along with Johnny Cash, Jesus Christ Superstar (performing all parts), Helen Reddy, and the Grease soundtrack. As a grown-up he has been featured on NPR’s Snap Judgment and The Advocate.  StormMiguel has performed at venues across the U.S. including The National Queer Arts Festival, CBGB’s Lounge, and Yale University.  In 2012, StormMiguel directed and released his first music video “I’ve Been To Manhattan,” which had its world premiere at the Frameline LGBT Film Festival.  You can see the video, which features trans and queer zombies, on his website: www.stormflorez.com. StormMiguel now lives with his wyfe (spelled with a ‘y’), their two cats, and their part time Chihuahua in San Francisco, CA.  StormMiguel also founded Bad Flower Productions – for queer, trans, and poc (people of color) artists.  Check it out at BadFlower.com. Photo: Sarah Deragon 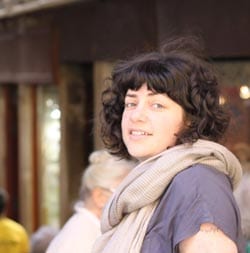 Susie Smith is a documentary filmmaker with a focus on urban community, in particular the way that race and sexuality intersect with gentrification and sustainable cities. Her interest in urban neighborhoods and community began while growing up in Washington, DC in the 80’s and 90’s in an interracial family of 10. This interest has deepened since moving to San Francisco in 1999 and witnessing the complicated relationships between environmental activism, the arts, and the tech sector on the make-up of San Francisco’s Mission District. She recently directed the short film, “People Live Here”, which explores history of urban planning on San Francisco’s Cesar Chavez St. and the people who inhabit it. Other current projects include Assistant Editing the documentary “Free For All: Inside the Public Library” and researching and creating web videos for the University of California Northern California Critical Sustainabilities Research Group. Susie’s professional experience includes work as a Producer, Camera, and Assistant Editor for both corporate and nonprofit clients including Sprint, Google, Cisco, The History Channel, Ella Baker Center, and the University of California Psychology Department’s Change For Good Program.

In addition to video work, Susie has participated in a wide range of artistic practice, including touring as installer of a robot rock band, set design for plays and film, and designing and selling her own jewelry “tincture” in boutiques and the Renegade Craft Fair. She holds an MA in Social Documentation from UC Santa Cruz, where she received a Porter College Graduate Arts Research Award, the Florence French Scholarship, and a Graduate Student Leadership Certificate. Photo: Jamon Franklin 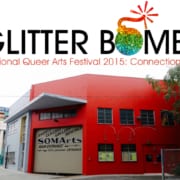