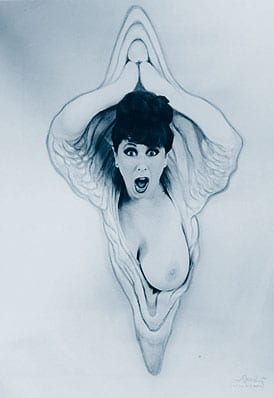 Cosponsored with Good Vibrations. A portion of the show’s proceeds will be donated to St. James’ Infirmary, which provides free health care to sex workers.

For the last quarter of a century, Annie Sprinkle has explored sexuality in all of its most glorious (and inglorious) forms. She has shared her findings through filmmaking, writing, photography, teaching workshops, and performing. She’s a sex-work pioneer, an AIDS educator, and out “metamorphosexual” … and proud of it! Ms. Sprinkle was one of the first women to inspire the term sex-positive feminist. Her unique work has achieved international praise and evoked controversy, in both underground and mainstream art/theater worlds.Cosponsored with Good Vibrations. www.goodvibes.com
St. James Infirmary is a beneficiary of Annie’s performances. SJI offers free, confidential, nonjudgmental medical, and social services for female, transgendered, and male sex workers. SJI is the first occupational safety and health clinic for sex workers anywhere run by and for sex workers! www.stjamesinfirmary.org, 415.554.8494.