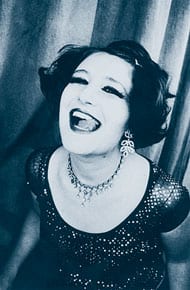 Footloose in collaboration with The National Queer Arts Festival presents Studly, written and performed by Lisi DeHaas, directed by Ginger Eckert, and with live piano arrangements by Jude Navari. The piece uses monologues, song, and dance to chronicle the coming of age of a young woman named Lulu who gradually realizes that her father is gay-and so is she. The play moves from the bright lights of Broadway to the queer Mecca of 1990’s San Francisco, in a wave of sexual awakening that intersects Lulu, her father, and several other characters. The versatile De Haas uses monologues, music, and dance to portray Lulu, her dad, the dance teacher, and Bunny. For all of these characters, studliness is a core value of their sexual and artistic identity. To perform well, to be studly, is their response to the intense vulnerability of desire, sexual difference and the yearning for authentic self-expression in a hyper-presentational world. Love, relationships, Broadway musicals, and betrayal come together in a provocative and dazzling display of difference and desire. More info: www.mightyreal.net

Lisi DeHaas
Lisi DeHaas, whose work has been described as, “mixing strains of cheerful vulgarity, surrealism, and surprising soulfulness,” (SF Bay Guardian), has performed original work at numerous venues in SF. Her pieces include: Dispossession Suite, as part of the Solo Mio Festival at the Climate Theater; Theft, at The Lab; and Three Ring, at Luna Sea Women’s Performance Project, directed by Adele Prandini. She originated the role of Tara Gold in Bayla Travis’ play, The Dyke and the Porn Star, at The Marsh. Her dance-theater piece, Visitation, in which a Mid-Western farm wife testifies about the murder of her transgendered lover, was initially part of Death on Heels: The Femme Dyke Show, at 848 Community Space. The last section of Visitation, Recipe for Grief was featured in two separate films about SF performers, presented at Gay and Lesbian Film Festivals in SF and Berlin. Studly was originally conceived during an AirSpace Residency at the Jon Sims Center for the Arts in the summer of 1999. It was then presented in workshop at Luna Sea Women’s Performance Project in April of 2000.