Voyages Elsewhere and Between 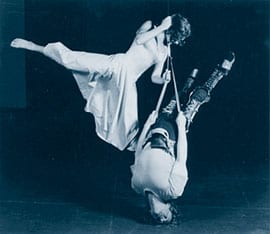 AXIS Dance Company presents Voyages Elsewhere and Between their second annual home season repertory performance. Recently nominated for an Isadora Duncan Dance Award for Best Company Performance, this exciting company featuring dancers with and without disabilities offers 3 world premieres including an as yet untitled work by dance innovator Stephen Petronio known for his forceful and provocative style; local luminary Sonya Delwaide’s Suite sans Suite, a quirky collection of vignettes set to music by Tin Hat Trio; and Up Syncline by AXIS’ own Alisa Rasera and Megan Schirle. Completing the program is an aerial duet, ‘of Air,’ choreographed by Stephanie McGlynn and Uli Schmitz of AXIS, in its Bay Area premiere and the encore performance of a Fantasy in C Major by Bill T. Jones. Opening June 7-9 with performances at 8pm and closing Sunday June 10 with a 2pm matinee at Ft. Mason’s Cowell Theater, these performances are part of the National Queer Arts Festival 2001 (cosponsored by the Queer Cultural Center and Harvey Milk Institute).

AXIS Dance Company has garnered national and international recognition for their artistic innovation with disabled and nondisabled dancers and choreographers. Dedicated to developing original contemporary choreography of the highest caliber, AXIS Dance Company has played a pivotal role in pioneering the new dance form known as “physically integrated dance.” AXIS is heralded as having an “expansive vision” (Boston Globe) AXIS boasts a “filmic…fluidity of motion…uniquely their own” (Daily Californian) that is a “visual and physical discovery” (East Bay Express). Voyages Elsewhere and Between is a triumph that brings out the very best in AXIS.