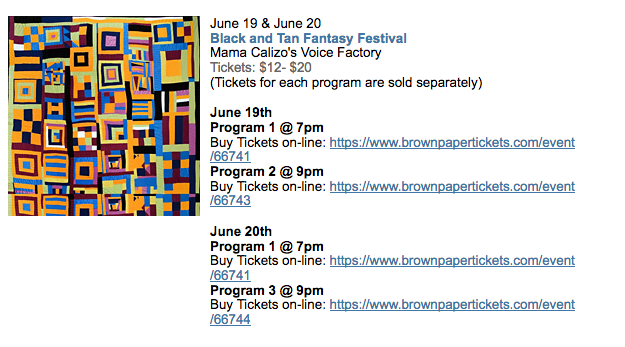 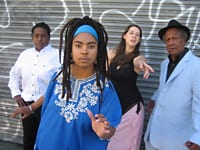 New Orleans Anonymous is a dramatic comment on New Orleans pre and post Katrina. It uses interdisciplinary performance inspired by anonymously voiced interviews re-conditioned for the stage. Listen as the sassafras voice of reality tangles with the surreal character metaphors.  This gumbo Ya Ya of a cast turns the stage into a brassy surprise of southern sophistication and conflict. Watch as Old New Orleans and New New Orleans get into a crawfish boil feud over who is better to lead the treasured Crescent City into its resurrection. Ramona as well as some of the members of the cast are from Louisiana, experienced Katrina, and view this piece as a prayer of healing for all who were affected.

My BFF, My Black Fat Fetish written and performed by Blue Buddha

Come on into Oral-Cul’s House, Be Bootiful!  Oral-Cul is a curvy mama with an open heart and a sultry voice that guides the weary urban traveler.  Like the “Eyes of Laura Mars” see what it means to be fat, black and queer in San Francisco all the while getting you wig worked.  Now this round da way virtual reality shop keeps its doors open in the TL for those who need to see past Starbucks and American Idol and get to the real, real life, the real you. Been told that you would be cute if you lost some weight?  Ever found some guy hot and nice but you couldn’t seem to get around the fat?  Well, Oral-Cul will smack some sense into you with a big bootie, a song and a smile.  Jump in her chair and take a ride and find out what’s missing.

Storytelling has long been a tradition in the African American community. In keeping with tradition we invite you to join us as we screen two dynamic films this Juneteenth for our Family Movie Night, “Brooklyn’s Bridge To Jordan” and “Black Aura On An Angel”. Also see previews of, “Mississippi Damned” and “Family”.

After losing her life partner in a car accident, a woman with a buried secret must not only fight to keep the couples’ estranged teenage son from her partner’s intolerant brother, but also rebuild her and her son’s troubled relationship. 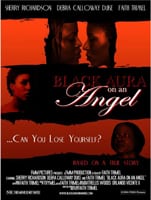 Black Aura On An Angel

After a chance meeting, Angel is completely captivated by the beautiful, mysterious Phaedra and the two women soon fall madly in love. But as the relationship intensifies, Phaedra begins a downward spiral that drags the loving Angel with her.

Filmmakers Tina Mabry, Morgan R. Stiff, and Faith Trimel have all been invited for a Q&A session. 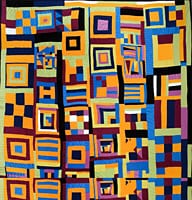 We continue our Juneteenth celebration with a tapestry of music, performance art, spoken word, dance, and poetry. Our quilt encompasses the many textiles of diversity reflecting our experiences as Same Gender Loving African Americans knitting our multiple identities into our Fabric of Brotherhood. 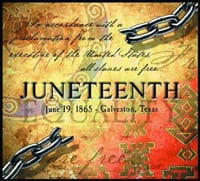 Juneteenth is the oldest nationally celebrated commemoration of the ending of slavery in the United States. From its Galveston, Texas origin in 1865, the observance of June 19th as the African American Emancipation Day has spread across the United States and beyond. Today Juneteenth commemorates African American freedom and emphasizes education and achievement. It is a day, a week, and in some areas a month marked with celebrations. It is a time for reflection and rejoicing. It is a time for assessment, self-improvement and for planning the future. See performances by Nathan James, Anthony Williams, Jerry.Brown:Rhythm.Art.Poetry. (aka JBRAP), Shurlavision, and host by Jair-The Literary Masturbator™

Poet, Writer, Arts Organizer Anthony Williams is a writer and performance artist based in San Francisco. He is the Co-Founder and Director of GuyWriters, a network of gay male writers in the Bay Area, and he is currently pursuing an MFA in performance art from JFK University in Berkeley.

Upon exiting the womb-Jan. 10th, 1978, after 32 hours of labor, a Blue hairy, Jerry.Brown:Rhythm.Art.Poetry. (aka JBRAP) took a good hard long look around the room and the people in it, his grandmother says, “he started crying and didn’t stop until he could move himself!” Did this Multi-Media-Renaissance-Vocalist-EmCee–4D–Perfomance Artist, somehow know then ( directly after-birth) what his hometown of East Palo Alto and the World had in store? we come from oracles! Many Hard Lessons, scarrs, & tentions, from An UnFair Unforgiving Life with Many Given Blessings!! Today he is humble, active and ornery in the same way, making his home in West Oakland and using his Mixed Media Social Change Arts (dual degrees) to create and encourage positively artistic, engaging, academic environments and safer spaces for the young people of our community. www.myspace.com/jbrap

Vocalist, Guitarist Shurlavision has made it a lifelong practice of always doing things her way.  Leaving the Motor City in 1993, she drove alone cross-country to Los Angeles to pursue her dream of writing and producing deosoul (Detroit-soul) music.  Heavily influenced by the music of George, Phyllis, Earl, Aretha and Anita, Shurlavision has emerged as a sensually-seasoned, soulful artist. Her music can be heard at www.myspace.com/shurlavision4u 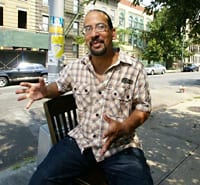 New York City writer and activist Nathan James is the author of several bestselling novels in the LGBT genre.  His works include Check Ride, The Devil’s Details, and the novella ThicknessFlesh To Flesh anthology.  Nathan writes for several online and print journals, and speaks out on causes and issues which move his spirit. www.nathanjamesonline.com

Jair-The Literary Masturbator™, is a poet, writer, spoken word artist, and activist new to the Yay Area from Southern California where he was a regular at PoetsJazzHouse in Leimert Park. He has curated and performed at events such as The African Marketplace, Los Angeles Black Book Expo, West Hollywood Book Fair, FUSION LGBT People of Color Film Festival 2005, and others. His work has been featured in Sequioa, In The Meantime “Statements of Pride”, and he is author of “Sacred Sensual Secrets” a chapbook collection of his erotic poetry. Take him to your favorite restaurant or club and treat him to dinner or a drink. He likes to keep to himself yet likes to be noticed (what the??!!??). He’s a Laker fan and a Libra blah blah blah www.myspace.com/theliterarymasturbator

Smash the Church, Smash the State

Days I Moved Through Ordinary Sounds

Queeriosity 2009 Exile: Vision Quest at the Edge of Identity
Scroll to top