Black Faggotry a book celebration, a community gathering a night a Black Gay Male Excellence. Join Dazié Grego-Sykes and featured performers Blackberri, Marvin K. White, Sampson McCormick and Rotimi Agbabiaka. This event is an opportunity for us to come closer as a community and share our gifts. We stand in our power as we celebrate our ability to speak truth through art. 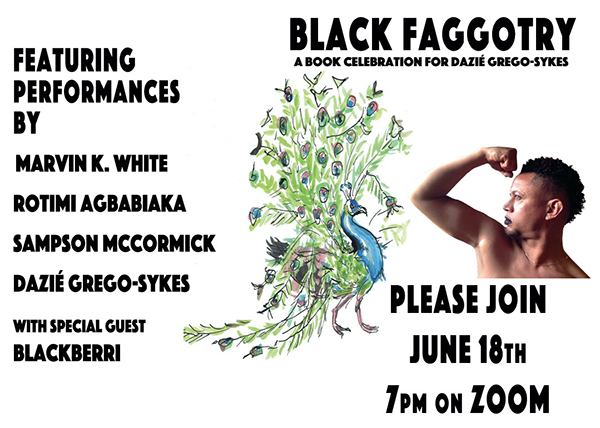 Dazié Grego-Sykes is an Oakland based performance artist and activist. He is a graduate of The Experimental Performance Institute at New College of California and holds an MFA in Interdisciplinary Arts and Writing from California Institute of Integral Studies. Currently, he is touring two solo plays AM I A MAN and NIGGA-ROO while promoting his spoken-word album titled MAKE ME BLACK. This evening Dazié is reading from his collection of poetry and prose BLACK FAGGOTRY which was published by Nomadic Press in early 2020.

Sampson McCormick is an experience, a down to earth comedic force of nature, and has been one of the most in-demand voices of diversity in comedy for two decades. He’s appeared on BET, TV One, VICELAND and FOX Soul One.

Rotimi Agbabiaka uses humor, glamor, and drama to upset the status quo. Most recently, Rotimi originated roles in House of Joy (California Shakespeare Theatre) and in If Pretty Hurts Ugly Must Be a Muhfucka (Playwrights Horizons, NYC). Rotimi penned the plays Type/Caste (Theatre Bay Area award), Seeing Red, and MANIFESTO; teaches performance to students from pre-school through college, and has graced nightlife stages around the world (as alter ego Miss Cleo Patois).