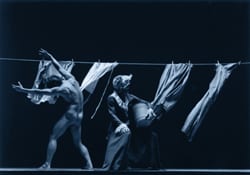 JGPG’s 2003 season will feature the world premiere of Folk, the second installment in a trilogy of work that began in 2002 with their acclaimed Mythic, Montana, a large-scale work that explored that which is between contemporary life and ancestral existence, as told in Greek mythology. Folk continues the profound examination of the American West, where ordinary people often have extraordinary spirits and stories. The program also features Transparent Body, a cabaret-influenced work, both shocking and endearing, that features Goode himself in tour-de-force dual roles as a young man seeking self and community, and his red-necked, beer-chugging and foul-mouthed father.

In 1986 Joe Goode Performance Group (JGPG) incorporated as a non-profit organization. JGPG has performed annually in the San Francisco Bay Area since its founding and has toured extensively throughout the U.S. and appeared in Canada, Europe, and South America. As well as its stage repertory, Joe Goode Performance Group is known for its performance installations and video collaborations. Since 1989 the company has had major installation works commissioned by the M.H. de Young Memorial Museum and the Capp Street Project, both in San Francisco, and has collaborated with Bay Area film makers on a variety of projects, one of which, Good”s signature work 29 Effeminate Gestures, was produced by PBS and aired nationally on Alive From Off Center. Goode has recently been honored with a New York Dance and Performance Award, a “Bessie,” for the 1998 creation and choreography of Deeply There (stories of a neighborhood). Also in 1998, Joe Goode was awarded one of the first Irvine Fellowships in Dance, and in 1995 was one of only ten U.S. choreographers to receive a prestigious National Dance Residency Program grant for artistic development.

The Size of Her Rage