THE DYKE MARCH
A March for Social and Sexual Freedom – Lesbians Unite! 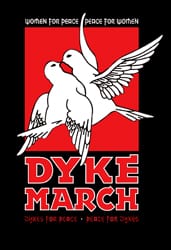 The San Francisco Dyke March is the largest annual grassroots lesbian event in the world. Held on the last Saturday in June, the evening before the City’s Lesbian/Gay Freedom Day Parade, the Dyke March serves as an annual opportunity to build community among lesbians and all women who wish to support social and sexual freedom. The two-hour march is preceded by a three-hour cultural event in Dolores Park.