I SWING LIKE THAT: AN EXPLORATION OF JAZZ AND IDENTITY
Written and Performed by Cedric Brown and Accompanied by the 1150 Trio 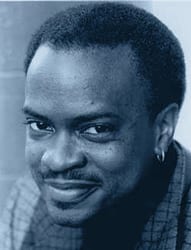 Despite, or perhaps because of, its dual roots of innovation and improvisation, jazz can be a macho world of musical one-upmanship, yielding little space to queer or female performers. San Francisco’s “crown prince of vocals,” Cedric Brown, breaks down traditional notions of jazz musicians while maintaining the integrity of the music. Inspired by the lives of black gay musicians Billy Strayhorn and Andy Bey, Brown will explore how identity expresses itself through the stories of jazz standards and original music, accompanied by the 1150 Trio (Elise Giancola, Jory Cunningham, and Glen Iwaoka). Written and performed by Cedric Brown, one of JSC’s The Best of AIRspace Artists in Residence.

Cedric Brown is a musician and performer with past experience in gospel choirs, a cappella vocal groups and musical theater productions. Cedric was the vocalist and arranger for the soul band Cleo Blue, and was frontman for the 1150 Trio jazz ensemble. Cedric has performed several times in the Afro Solo Festival, at the SF LGBT Pride and in Cultural Odyssey’s Underground Jazz Cabaret. His 2001 performance in Marvin White’s poetry play For Colored Boys… received glowing reviews in the SF Chronicle, the Bay Guardian, and the SF Examiner. He has also performed at the Brava Theater, ODC Theater, La Pena Cultural Center, Freight and Sa