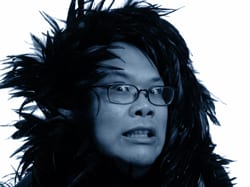 In support of the next generation of queer youth writers, Queeriosity & The Monster Debut will bring together established writers and youth poets of Youth Speaks. The evening will feature readings from selected works and will preview soon-to-be published works of the Youth Speaks Small Press Project. Interlaced with musical intermissions, this event also features Lolan Sevilla of Flip Dyke poets, and Tim’m from DeepDickollective. Curated by Joel Barraquiel Tan who will debut his first book of poetry, MONSTER, out on Noise Press. Presented by Youth Speaks.

Alfred Arteaga born in East L.A., is the author of two books of poetry, Cantos and Love in the Time of Aftershocks, editor of An Other Tongue: Nationalism and Ethnicity in the Linguistic Borderlands, and author of Chicano Poetics: Heterotexts and Hybridities. He teaches literature at the University of California, Berkeley.

Leilani Chan is an internationally-known performance artist born and raised in Honolulu, Hawai’i. Chan is a founder and Artistic Director of TeAda Productions and recipient of the Brody Fellowship for Performing Arts. As a performer, writer and director, she has worked with numerous theater companies in California, Massachusetts and Hawai’i.

Jaime Cortez is a San Francisco-based artist/writer/cultural worker. Jaime’s writing has been anthologized in numerous collections and he was the editor of the queer Latino anthology “Virgins, Guerrillas & Locas,” and the
new magazine “Corpus” produced by the AIDS Project Los Angeles. Jaime co-founded the late comedy trio Latin Hustle, and he is currently the Program Manager at Galeria de la Raza.

Philip Huang is a 27 year old writer living and working in the East Bay. He is honored to be part of this celebration of Joel Tan’s work.

Maiana Minihal is a queer Filipina American poet born in Manila, raised in Los Angeles, and currently living in San Francisco. She studied poetry at UC Berkeley with June Jordan’s poetry collective Poetry for the People. In 1995 they toured the New York City poetry scene and won the Nuyorican Poets’ Cafe Poetry Slam. Since 1994 she has taught poetry and writing workshops throughout the Bay Area, and continues to perform regularly. A published author, she produced her first poetry chapbook “closer”, in January 2003, and in February co-produced ashowcase of queer Filipina performers called Halo-Halo: A Queer Pin@ y Revue.

Sean San Jose is a well-known Bay Area actor. In addition to his theater and film work, he is one of the founders of the theater company, Campo Santos, as well as, the creator of PIECES OF THE QUILT, a collection of shorts by various playwrights about the subject of AIDS.

Joel Barraquiel Tan was born in 1968 in Manila. He received his B.A. at UC Berkeley in Ethnic Studies & is currently working on his M.F.A. at Antioch University in Creative Writing. Joel Barraquiel Tan is a writer and an activist, active in the fight against HIV/AIDS since 1988. He has published fiction, essays and poems in both popular and academic anthologies, including Asian American Sexualities and On a Bed of Rice: Asian American Erotica. Joel is also the editor of Lambda Literary Award’s Best Book award for a collection of Queer Asian and Pacific Islander Erotica. He has just released a book of his selected poems Monster on Noice Press.

Tim’m T. West, an educator, scholar, journalist, poet, and rapper, completed his B.A. at Duke University majoring in Philosophy with a focus on Women’s Studies. In 1999 he co-founded and began recording and touring nationally with Deep Dickollective (D/DC). Widely recognized for his poetry, he has read alongside G. Winston James, Marvin K. White, Jessica Care Moore, Ursula Rucker, and Jewel Gomez. In 2003, Tim’m will be releasing a musical complement to “Red Dirt Revival” on Cellular Records: “Songs From Red Dirt He currently teaches English and Creative Writing at Oakland School for the Arts.