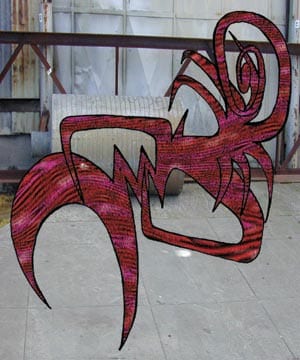 A multimedium artist working in art and technology.

Neither nor. Either or. None of the Above. All of the Above. Depends on the day. Muppet identified. Gender is a limitation. A box that I don’t fit in and don’t care to. My identity doesn’t require a gender. I don’t feel a need to change my body, but I don’t feel an allegience with the gender my body apparently details. My choromosonal makeup fades the lines of gender, though it doesn’t make me intersexed. I don’t fit into any of the black and white categories that gender presumes to lay out.

Dangerously pegged as a freak in small town Iowa, I escaped in my teens to Belgium where I found myself much freer to co-exist with the creative force. From that distance I began to develop my visual voice.

My figures are austere forms, line drawings with direct broad strokes that I can not help but draw. I immerse myself in the transformation of these figures into a work, intuitively painting the time and place for them. Interpreting their story without limiting it or isolating its meaning. These works comment on the world around me.

Visually, I am primarily self taught. Most of my education was in a musical vein. My visual work is influenced by the performance and musical work. The improvisational nature of my compositions and the experiences of many years of involvement with collaborative music environments on the internet have made their mark.

My works deal with raw emotion addressing potential violence, violation and vulnerability. They touch on the fight for respect and control in life. Degrees of loss of control over one’s existence. The force of will required to move beyond the fragility of physical existence. They are executed in digital collage realized on Giclée Canvas and as acrylic on panel with 3-D sculptural elements forcing their way out of the 2-D painting.

Art and technology are inseparable, and working digitally is a new medium. Painting digitally or with acrylic, the creative process is the same. My drawings begin with paper and ink, forming the basis of my paintings that are created in the digital realm. My computer is an extension of me. I am tied to it in a way that makes it more than a tool or assistant. The finished works return to the physical world as Giclée canvas or photobase & live projection.