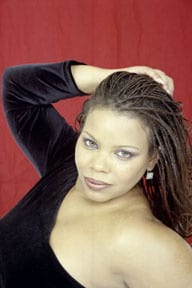 The seductions of Chicago’s C.C. Carter and San Francisco’s Maiana Minahal are featured in this special evening dedicated to all things femme. Carter and Minahal will each perform solo works.

Carter has hypnotized audiences with performances and writing that empower women to embrace themselves and love themselves for who they are, not what they feel they are supposed to be. In addition to her recent release of Body Language (Kings Crossing Publishing), Carter is the author of a chapbook, Letters to My Love. This year she will be a judge and celebrity at the 2002 Gay Games in Sydney. Carter can be seen touring the Women’s Music Festival circuit, performing from her poetry and prose work, Living Large In A Shrinking America. She is an adjunct professor at Columbia College in Chicago where she teaches performance poetry workshops. She is currently the program director for an adult literacy and GED program in Chicago. She earned her M.A. in creative writing from Queens College in New York and received her B.A. in English literature from Spelman College in Altanta.

Maiana Minahal is a queer Filipina American poet who was born in Manila, raised in Los Angeles, and currently lives in San Francisco. She began studying and teaching poetry in 1994 with June Jordan’s Poetry for the People collective at UC Berkeley. Her work is included in June Jordan’s Poetry for the People: A Revolutionary Blueprint, Take Out: Queer Writings from Asian and Pacific America, the cd Infliptration, and the upcoming anthologies Screaming Monkeys and inVasian: Asian Sisters Represent. She writes haiku daily and performs regularly throughout the Bay Area.

FOLLOW US!
2 Men TalkingMap of a Virtual World
Scroll to top